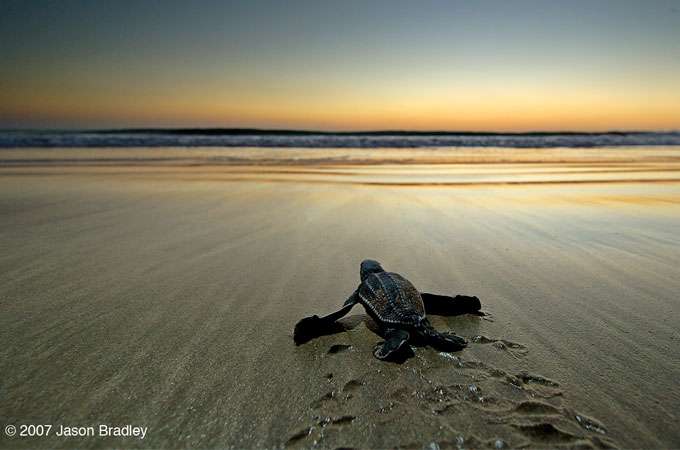 What is it about the word turtle? Why must a fatally outdated style of knitwear, one of America’s corniest Sixties pop groups, and a dire children’s cartoon series all cluster around this innocuous word? The clumsiest thing you can do in a boat is turn turtle. The turtle itself invariably cuts a ridiculous figure with its hapless-looking flippers, its armor-plated clumsiness, the gently extraterrestrial contours of its skull, its famous sex drive . . . “The turtle lives ‘twixt plated decks Which practically conceal its sex. I think it clever of the turtle In such a fix to be so fertile,” wrote Ogden Nash.

But now a group of very serious people who have made their life’s work the study of the Pacific leatherback turtle have gritted their teeth behind fixed grins and decided to make the most of the fact that the turtle cannot avoid being funny.

The bitter fact is that the leatherback, which is as old as the dinosaurs to which it is closely related and which sailed blithely through the cataclysmic event that wiped out all its earthbound cousins 65 million years ago, is now on the verge of extinction. So the people of the Pacific Leatherback Trust have turned the Pacific leatherback’s desperate Pacific odyssey into an online children’s game.

It’s called the Great Turtle Race, and you can find it at greatturtlerace.com. The “race” is the Web-based dramatization of a natural event that has been going on for about 100 million years, way before the advent of man, back in the Cretaceous period and the heyday of the dinosaurs. From the gently sloping yellow sand of Playa Grande in Las Baulas National Marine Park, Costa Rica, 11 huge female leatherback turtles—up to 900 kilograms in weight and almost two meters long—wade and waddle and slap their way across the sand and into the
eastern Pacific.

Their names are Turtleocity, Purple Lightning, Billie, Windie, Genevieve, Saphira, and so on. On the website, one is at the wheel of a car, one is reading a travel brochure while wearing a baseball cap and sunglasses, one has a dragon perched on its back.

Flip the card to read more about the turtle: “If it were possible to burn rubber under water,” burbles Genevieve’s card, “this would be the turtle to do it. She’s revved up and ready to roll
. . . She started the race with some fresh scrapes and wounds on her shoulder,” says Windie’s card, “but this fighter completed the long trek to her nesting site and is back in the water and on her way. The sentimental favorite, she has a good shot at first place . . .”

Go to www.greatturtlerace.com to follow the progress of the turtles as, nesting finished, they launch them-selves from the beach and set off in a long arc 1,900 kilometers across the ocean to their feeding grounds in the Galapagos Islands. Of course, the turtles didn’t all start out on April 16, as the game pretends; as with the Tour de France, starts were staggered—the turtles set off when they chose—so the game is also called “Tour de Turtle.” To make it more fun and encourage masses of people to go to the site, the game implies that it is all synchronized. But what is true is that the leatherbacks are all starting from the same place—the beach that has become the last refuge of the leatherback on the East Pacific coast, the only spot along this great sweep of sand where they still come to nest—and the Galapagos is where they will all end up. Drift nets and pelagic longlines allowing, of course.

The Internet turtle race is made possible by satellite tags: during the 20 minutes or so in which the turtles deposit their eggs in the sand, they are immobile—in a sort of trance—allowing the Trust people to strap backpacks containing satellite transmitters to them. But of course the “race” is just a cute spinoff from the real purpose of the tags, which fall away after a couple of years.

So the chances of Billie, Windie, Purple Lightning, and the rest making it all the way to the Galapagos are less than brilliant—particularly given the 1996 experience of Frank Paladino, head of biology at Indiana’s Purdue University, and his team. “Many of these satellite-tagged turtles seemed to hit a zone in the Pacific where the transmitters and the turtles seemed to disappear . . . we suspect that they are being caught on longline and gill net fisheries near the Galapagos Islands and off the coasts of Ecuador and Chile.”

So a warning to parents of small children for whom the Great Turtle Race might seem the perfect introduction to learning to care about the environment: it could all end in tears. Just like the real world.