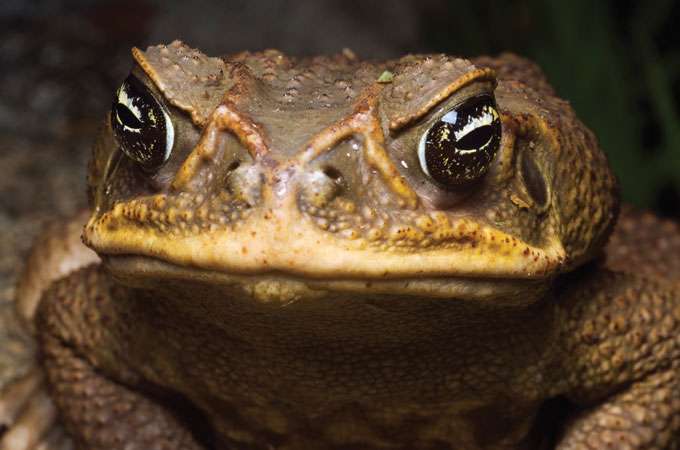 Since their first introduction to northern Queensland in 1935, cane toads (Chaunus marinus) have hopped across more than 1 million square kilometers of the Australian landscape. Carnage has followed the invasion, as native animals have fallen prey to the toads’ voracious appetites and naïve predators have succumbed to their toxic defenses. Control efforts have had little success, but according to research recently published in Proceedings of the National Academy of Sciences, there could be a chink in the alien’s armor. Remarkably, many toads at the invasion front have bad backs.

Animals at the leading edge have evolved a suite of adaptations to help them cover more ground: larger bodies and longer legs, coupled with an unerring sense of direction, mean that the invasion front moves faster and farther than established populations. But a group of scientists led by University of Sydney biologist Rick Shine has found that these adaptations have left the toads at their physiological limits and prone to arthritis-inducing bacterial infections. “Frogs aren’t built for the kind of sustained athletic performance we see from invasion-front cane toads,” Shine said. “So it makes sense that their bodies can’t deal with the stress of it all.”

Around one in ten toads was found to have fused, swollen vertebrae infected with Ochrobactrum anthropi, a ubiquitous soil bacterium. Vulnerability to the usually benign microbe suggests the toads are facing an evolutionary trade-off between physical prowess and the ability to fight disease. Shine is currently focusing his research on this prospect. “We want to look into the roles of stress and immunocompetence in more detail and explore the possibility that the invasion-front toads may be so immunocompromised that they are vulnerable to novel control methods,” he says. Perhaps the toad isn’t invincible after all.