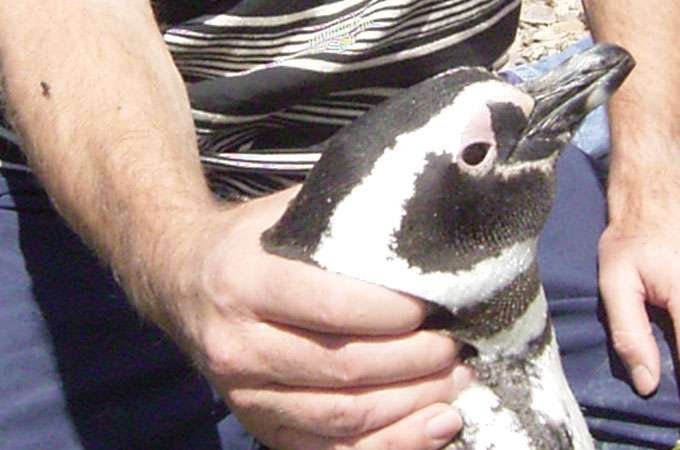 As a doctoral student in the early ’80s, Rory Wilson was thrilled when he finally started studying firsthand the behavior of African penguins (Spheniscus demersus) on the South African coast. But a hard reality quickly became apparent when his subjects waddled off into the impenetrable depths of the Benguela Current.

“I watched them all jump in the water in the morning and disappear, and come back in the evening and say, ‘Guess where we’ve been,'” recalls Wilson, an aquatic biologist and head of Swansea University’s Institute of Environmental Sustainability.

Wilson’s days of guessing are over. After several decades of experimenting, Wilson has developed the “daily diary,” a compact, lightweight recording device that can document the hidden-from-view behavior of a vast array of birds, fish, and mammals. The diary promises new insights into the energy demands on animals and into aspects of their world contributing to their decline.

Palm-sized and weighing less than 50 grams, the daily diary is less bulky than previous tracking devices, so most animals move unhindered. It also reaches where a GPS often can’t: underwater and into dense forest and underground burrows.

Meanwhile, the diary can hold a small suite of onboard instrumentation rivaling the dashboard in your car. A triaxial accelerometer measures an animal’s acceleration—”the major player in movement”—and an animal’s energy use as it goes up, down, left, right, forward, and back. With the help of a solid-state electronic compass and dead reckoning, the diary calculates speed, direction, and position 10 times a second. The trip gets logged onto a flash memory card that can hold 650 million pieces of data over four months. Researchers can then retrieve the device when animals return to their nesting sites, or they can release it via a radio signal. Four out of five devices released from seals in the North Sea find their way home with the help of beach walkers eager to receive a 50-Euro reward.

Wilson put the device through field trials on his border collie, Moon, and recorded the dog’s breathing rate by looking at the slight variations in the device’s position. Left on overnight, the device showed Wilson how the dog would take a breath every two seconds when his master was nearby, but only once every six seconds when he was absent. The dog would stop breathing entirely when Wilson raised his hand to signal he was about to give a voice command.

When Wilson put the device on penguins in Argentina, he was struck by the variations in their wing beats as they paddled in a dive, cruised on the bottom, and stopped paddling entirely as they drifted to the surface. Work with the device on cormorants showed they use 10 percent more energy bringing food back to the nest than returning without food. The device is also sensitive enough to detect and record the birds’ courtship displays, raising the prospect of a technology capable of performing better than a professional observer’s own eyes.

“I don’t actually have to see what the bird is doing now,” says Wilson. “I can just pull out the data.”

The diary will help researchers get a better understanding of an animal’s energy use, which in turn will guide their understanding of the best habitat or area needed to sustain a viable population. Andrew Trites, director of the Marine Mammal Research Unit at the University of British Columbia, is using the device to follow northern fur seals (Callorhinus ursinus) in Alaska’s Pribilof Islands with an eye toward learning whether they are competing with commercial fishermen for food. The Pribilof population, the world’s largest, is one-fourth of what it was 50 years ago and is declining five percent a year. Until the daily diary came along, researchers were getting only a rough idea of the seal’s whereabouts and behavior, says Trites.

Now, he says, “It’s almost like you’re on the back of the animal watching every move the animal is doing.”

Researchers from Australia to Alaska are slated to put the device on some two dozen species over the next year, thanks in part to the US$100,000 prize Wilson received, along with a gold watch, as part of a Rolex Enterprise Award. Wilson hopes other researchers will help improve the device’s analytical software so they can see an animal in a virtual reality, projecting the animal onto a screen as it moves about what was once a largely invisible world.