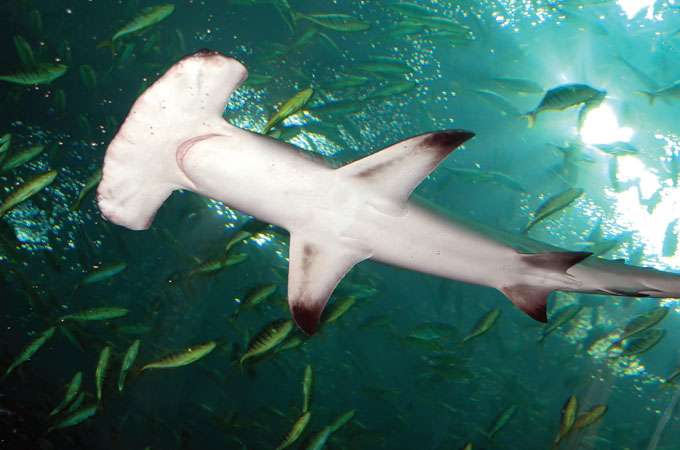 After decades of heavy fishing, it’s no surprise that great sharks have virtually disappeared from the U.S. Atlantic seaboard. But it is surprising that they are taking bay scallops and probably other bottom-dwelling shellfish with them.

“In the past, people thought removing predators wouldn’t affect other parts of oceanic food webs because other predators would compensate,” says Julia Baum of Dalhousie University in Nova Scotia, Canada.

Not so, according to a study published in Science. “We show that industrial fishing is removing whole groups of top predators so that no species is left to compensate,” Baum says. The largest sharks, the great white and the great hammerhead, reach lengths of up to six meters and devour their smaller cousins in huge quantities. As great shark populations have plummeted, populations of their prey—including smaller sharks, skates, and rays—have exploded by as much as twenty-fold in the past 35 years.

With an estimated population of some 40 million, the four-foot cownose rays scarf up vast quantities of shellfish during their fall migration from Long Island to Florida. On the basis of experiments comparing scallop survival in fenced and unfenced seabeds, the researchers found that the rays have eaten nearly every bay scallop in North Carolina’s traditional fishing grounds since the mid-1990s. Because the rays feast before the scallops spawn, these shellfish never had a chance to recover.

And the damage may not end there. Scallops often sit on top of the seabed, making them easy to find. But now rays may be ripping up seagrass beds in search of buried shellfish.

This unfortunate chain of events is likely to be repeated elsewhere in the world. Already in Japan, where large-shark fishing is intense, longheaded eagle rays are on the rise and shellfish are in decline. The ocean’s legendary bounty notwithstanding, marine ecosystems can take only so much before they stop giving.

Editor’s note: Lead author Ransom Myers passed away on March 27, 2007. He dedicated much of his life to documenting and communicating the extent and effects of overfishing.