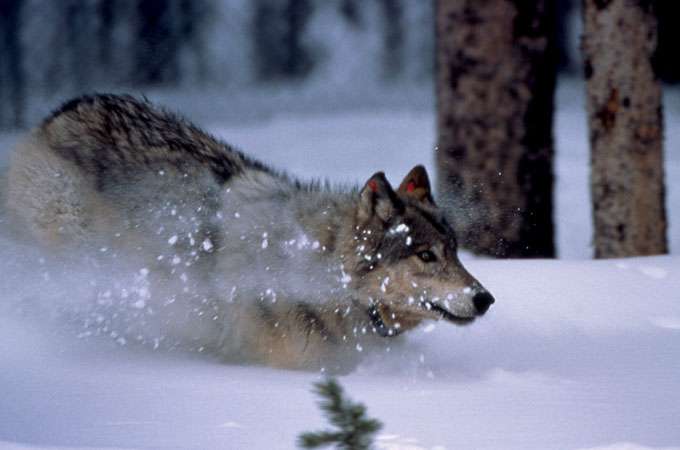 Wolves and other top predators may help other species cope with climate change. Milder winters in Yellowstone National Park mean fewer elk (Cervus elaphus) die late in the season, which is tough on bald eagles (Haliaeetus leucocephalus), grizzly bears (Ursus arctos), and other scavengers that depend on the carcasses.

Many scavengers — from ravens (Corvus corax) and bald eagles to grizzly and black bears (Ursus americanus) — rely on carrion to get them through the winter in Yellowstone. However, without gray wolves (Canis lupus), carrion got scarcer as late winters got milder because deaths of elk depended primarily on snow depth. But after wolves were reintroduced in 1995, they once again became the primary cause of elk death and thus carrion availability.

To see whether wolves could buffer the impact of climate change on late-winter carrion, Wilmers and Getz analyzed 55 years of weather data from northern Yellowstone National Park, which has the park’s largest elk herd (at perhaps 10,000) and nearly 100 wolves. The researchers then estimated carrion availability with and without wolves by using models that accounted for factors including snow depth, wolf pack size, and elk kill rate as well as changes in the wolf and elk populations.

“Late winter carrion in Yellowstone will decline with or without wolves, but by buffering this reduction, wolves extend the timescale over which scavenger species can adapt to the changes,” say Wilmers and Getz. They are now testing whether scavenger populations are in fact higher in areas where wolves have been reintroduced.

This work also shows that there is no substitute for intact ecosystems. “Their conclusions challenge the notion that human hunting serves as a surrogate to wild carnivore predation. Wolves distribute carrion widely in time and space, whereas modern human hunters do not,” says Douglas Smith of the National Park Service, who leads the Yellowstone Wolf Project.