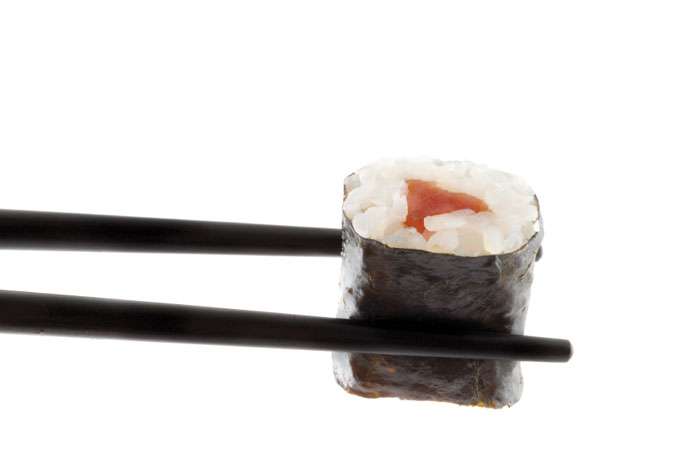 A Tale of Three Tuna

Imagine sitting down at your favorite sushi bar. The chef reaches across the fish case and serves you three pieces of sushi. “Bluefin tuna,” he says with a grin. The pink flesh of bluefin, marbled with fat, is considered by many connoisseurs to be the ultimate sushi delight.

These three pieces of bluefin look exactly alike, but the chef points at them and frowns. “Each of these tuna is different,” he says. His gaze sweeps across the fish in his case. “Depending on what you eat,” he continues, “you can save the future of sushi . . . or destroy it. Your choice.”

The first piece is “wild caught.” This fish was harvested the old-fashioned way, from the open ocean by a fisherman. It might have been caught off Boston or Vietnam or in the Mediterranean, flown on ice to Tokyo for grading and pricing, and then flown to New York, Los Angeles, or Kansas City. Fishermen have caught so many wild bluefin that in some areas of the globe, 90 percent of the fish have been wiped out.

This brings us to the second piece of sushi. This bluefin tuna would be labeled “farmed.” Sounds promising, right? Trouble is, this second fish—like most bluefin that are labeled “farmed”—wasn’t farmed at all. It was actually “ranched,” a questionable technique that tuna entrepreneurs pioneered in the early 1990s.

Just like the first of our three pieces of tuna, this ranched variety began its life in the open ocean. Fishermen trapped a school of these fish in a huge net, but instead of killing them, they towed the net to a holding pen near shore. Then they fed the tuna a rich diet of frozen fish for a few months, until the bluefin had grown big and fat.

Unlike true farming, ranching does nothing to help stocks of wild bluefin. If anything, it worsens their plight, since the fish are often trapped at a younger age, before they’ve had a chance to do much mating.

And now to our third and final piece of sushi. It looks deceptively like the other two pieces, but it represents a new development in tuna science and technology.

Until recently, no one had actually managed to cultivate bluefin in captivity. The fish are edgy, enormous, and very fast swimmers. But after several decades of experimentation, biologists at Kinki University in Japan finally succeeded a few years ago. They sold the first of their truly farm-raised bluefin to restaurants in Japan in 2004.

Unfortunately, when it comes to most types of fish, farming has often caused as many problems as it has solved—pollution, genetic alterations, and health risks, not to mention flesh that tastes bland. It remains to be seen whether truly farmed bluefin turn out to be as sustainable and ecofriendly as the farmers claim.

So which of the three pieces of bluefin on your plate should you choose? If you had to pick one, the third—the truly farmed variety (if you can find a restaurant that serves it)—would at least take some of the pressure off the decimated populations of wild fish.

But here’s another idea: When you sit down at the sushi bar, ask your chef what he’d recommend besides bluefin. What most sushi lovers don’t realize is that tuna was never a traditional sushi fish in Japan in the first place. It wasn’t until the Japanese began to eat a more westernized diet in the twentieth century, with fattier foods and more red meat, that the cult of bluefin began.

Trevor Corson lectures frequently on seafood sustainability and is the author of The Zen of Fish: The Story of Sushi from Samurai to Super-market; learn more at TrevorCorson.com. A longer version of this article originally appeared in DiningOut magazine.