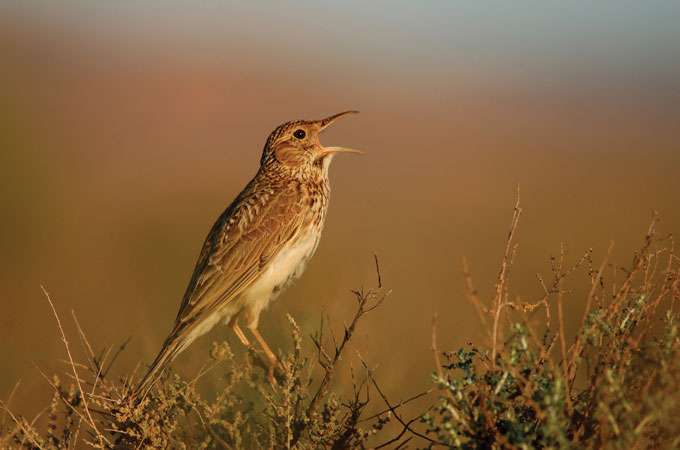 With more than 500 species of songbirds threatened with extinction, scientists are constantly hunting for new ways to figure out which other populations are in trouble. Now, a team of Spanish researchers has deduced that a key indicator of population health might be hidden in the songs birds sing—or, more precisely, in the complexity of those songs.

Working on Spain’s Iberian Peninsula, a team led by Paola Laiolo of the Doñana Biological Station listened in on the Dupont’s lark (Chersophilus duponti). The lark’s song, a sort of nasal whistle, is made up of several distinct phrases, which male birds stitch together into tunes of varying complexity.

The lark is on the verge of disappearing from Spain, and Laiolo’s team suspected that the songs’ complexity, as well as the rate at which the larks sang them, might contain key information about the health of particular lark populations. The reasons: birds that sing complex songs generally have larger brains and good nutritional backgrounds, and high song rates reflect high energy levels.

When the researchers started comparing these two factors with other indicators of population health, some strong correlations emerged. Birds in healthier Dupont lark populations—those that have higher growth rates, higher numbers of male birds, and higher ratios of young birds to adults—sang a diverse array of complex songs. Birds from slower-growing, less-vital populations were more likely to sing simpler songs.

Reported in the journal PLoS One, this finding marks the first time such a close link has been shown between a bird population’s behavioral traits and its overall health. And with climate change pushing more birds toward the brink, Laiolo hopes his research can help construct an early-warning system to pinpoint which species will be the next to suffer.

All told, roughly eight to 14 percent of the 294 turtles nesting at Pongara in the 2003–2004 season were impeded or killed by the logs. Laurance believes the same thing is occurring on beaches all along Gabon’s coast.

The only feasible solution would be to remove the logs by using bulldozers, which could easily make things worse. Not only could these machines rip up the beaches, but new roads would also have to be built to allow bulldozer access. Given the Gabonese people’s taste for turtle eggs, such an easy pathway to the nesting grounds could prove disastrous to leatherbacks.

As logging increases throughout the tropics, the number of logs making their way to coastal areas will grow, and Laurance believes the logging will harm far more marine species than just the turtles. Before landing on the beaches, logs will often pitch and roll in the surf. Such logs have been known to kill crocodiles and people in Gabon and bang up coral reefs and clam beds in other parts of the world. “Basically, anything that gets in their way is turned into mush,” says Laurance.