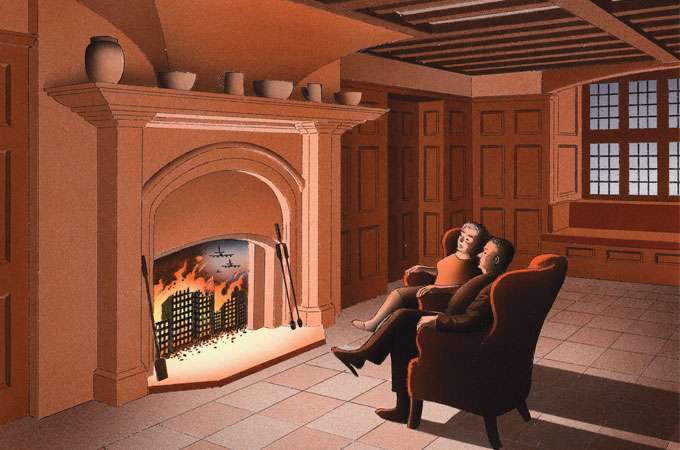 Six Degrees: Our Future on a Hotter Planet

When Mark Lynas’s book Six Degrees: Our Future on a Hotter Planet came out in the U.K. last year, my initial reaction was that it was alarmist and probably not worth reading. A review in The Sunday Times (London) included a “red alert” list of catastrophic consequences of global warming accompanied by statements such as “forests ravaged by fire,” and “humans migrate in search of food.” (1) Such statements are at once frightening and vague (forests are ravaged by fire all the time) and go far beyond what science has to say about the matter. Even under the worst imaginable global warming scenarios, human activity will still depend more on human social behavior than on anything else.

Yet “alarmist” is a term that gets bandied about frequently in discussions of global warming, and it can be too carelessly applied. When I spoke with Lynas, he told me The Times had misconstrued what he had written in his book, and he assured me it was based entirely on the scientific literature. My colleague Stefan Rahmstorf agreed, saying in his review in Nature that the book is “alarming” but not “alarmist.” (2) The difference was very much on my mind as I sat down to write my own thoughts on the book.

Six Degrees, as the title suggests, consists of six main chapters. Each examines what the earth might look like as we raise the planet’s temperature by one, two, and more degrees Celsius. Laying out the book in this way makes for a logical progression of ideas—and a fair bit of suspense. Very few people, Lynas says, have got “the slightest idea what two, four, or six degrees of average warming actually means in reality,” and I’m sure he is right.

In chapter one at one degree Celsius, for example, Lynas describes a world with an annually ice-free Arctic Ocean. Yes, that’s quite plausible and supported by the literature—it’s perhaps even occurring a little sooner than expected. In the next chapter, as the two-degree-Celsius line is approached, Lynas warns that southern China can expect more flooding; the oceanic time lag means that it may take much longer for the rain-bearing summer monsoon to reach the drought-stricken north. That, too, is certainly plausible, based on the studies he cites. At four degrees Celsius, with global sea levels half a meter or more above current levels, “the Egyptian city of Alexandria’s long lifespan will draw to a close,” writes Lynas. “A substantial part of the city already lies below sea level, and by the latter part of this century a terminal inundation will have begun.” He continues predicting that a 50-centimenter rise in sea levels would displace 1.5 million people and cause US$35 billion of damage. Alarmist? Hardly. A 50-centimenter rise in sea level is well within the conservative IPCC projections, even for temperature increases of less than four degrees Celsius.

At five and six degrees Celsius, the book really does start to sound alarmist, with the analogy to Dante’s Inferno, used to good literary effect throughout the book, coming to the fore. At five degrees Celsius, Lynas paints a picture of “an entirely new planet . . . coming into being—one largely unrecognizable from the earth we know today.” At six degrees Celsius, he says, “the pump is primed . . . not for flourishing palm trees in Alaska, but for the worst of all earthly outcomes: mass extinction.”

“Aha!” say the critics. That’s alarmism. But is it? Lynas’s reference to the “entirely different planet” refers to the idea that at five degrees Celsius, the remaining ice sheets are eventually eliminated from both poles. That’s likely to be true. And unlike Al Gore’s discussion of sea level in An Inconvenient Truth, Lynas does emphasize the long timescales (thousands of years) in this case. Furthermore, published research raises the likelihood of a significant loss of ice sheets at lower temperatures, and Lynas could have claimed certainty of a disappearing Greenland ice sheet in an earlier chapter. That he doesn’t do so is characteristic of the book: it doesn’t tend to go beyond the published literature.

To be sure, Lynas does take a rather uncritical view of the scientific literature. For example, he highlights the purported evidence from a 2004 Nature paper of a slowdown in the North Atlantic Ocean circulation. (3) The follow-on study showing that the original data set was too small to say anything meaningful about ocean circulation trends was published after Lynas’s book was completed. (4) A deeper appreciation for statistics would have cautioned against highlighting those results in the first place. Does this constitute alarmism? I don’t think so. I think a layperson’s comprehensive reading of the published science—which I believe Six Degrees represents—paints a truly alarming picture of the future.

What Lynas’s book does do, however, is raise a different question. Is the future really so frightening, or does Six Degrees actually teach us as scientists that we are too provocative in the way we write our scientific papers? I don’t know the answer to this—in part because, like most busy professional scientists, I have no doubt read a smaller fraction of the literature than Lynas has. But I do think that all environmental scientists—including the conservation biologists who are likely to be reading this review—ought to read this book and ask themselves the same question. The answer is rather important. If it is we who are being alarmist, then perhaps we had better tone it down. On the other hand, if things are really so alarming, then perhaps we should be raising the alarm more vocally.