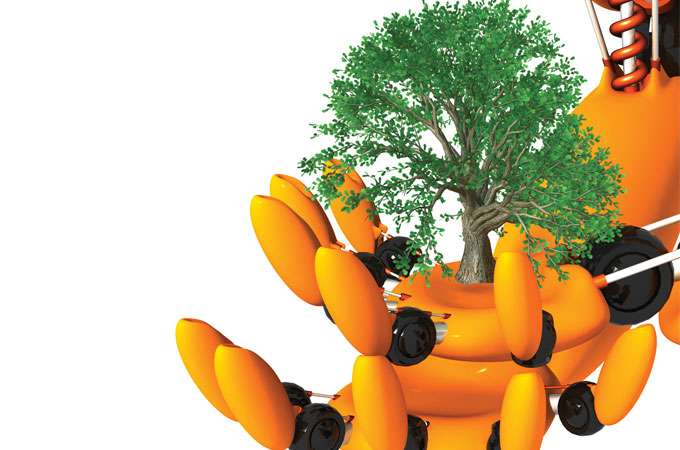 Planting trees has long been considered one of the best ways to absorb excess CO2 from the atmosphere. But with climate change threatening to change where forests grow, large-scale tree planting is a tricky proposition. A U.S. company is developing an alternate solution: a machine that mimics trees’ ability to soak up CO2 and can be “planted” anywhere on the globe.

Now being developed by Global Research Technologies (GRT) in Tucson, Arizona, the device is designed to fit inside a 12-meter-long shipping container and uses a high-tech, polymer membrane to filter CO2 from the air. According to the company’s director of business development, George Grimm, GRT already has a prototype and will soon finish a model that can remove one ton of carbon from the atmosphere each day.

To offset current emissions, millions of the machines would have to be posted around the globe, and Grimm envisions them positioned in locations ranging from open fields to skyscraper rooftops. While GRT hasn’t decided how much to charge for the device, Grimm believes the emerging carbon market sets the stage for rapid sales, and he foresees a day when companies will be eager to pay for ways to offset their emissions.

GRT is still working out serious kinks, such as where to store the carbon once it’s removed, and critics say the machine merely enables the world’s fossil-fuel addiction. Grimm counters that developed nations are unlikely to cut emissions substantially any time soon and argues that “we need a solution that captures CO2 in the interim.”