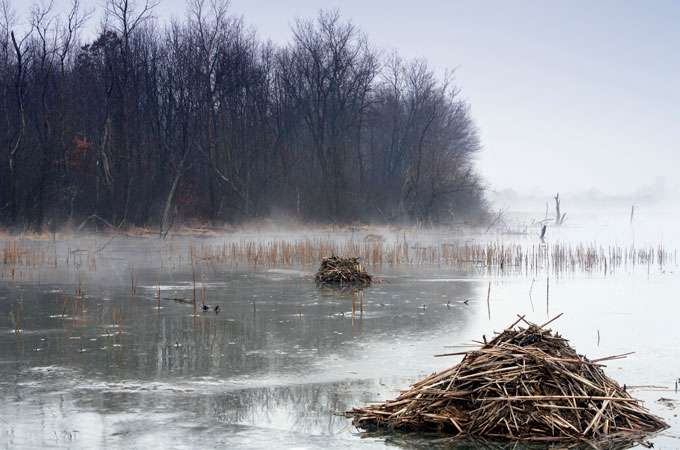 Climate change models predict more frequent and severe droughts in much of North America, and wetland habitats may be especially vulnerable. But a new study documents one simple and highly effective solution for helping these critical areas withstand dry spells. All it takes is beavers.

University of Alberta researchers Glynnis Hood and Suzanne Bayley used a 54-year record of aerial photographs to see how beavers influenced open-water wetlands in Alberta’s Elk Island National Park. Focusing on an 80-square-kilometer area of mixed boreal woodland, the team compared the photographs with climate information and park records showing the number and location of active beaver lodges. Beavers were extirpated from the area in the mid-1800s and not reintroduced until 1941.

The researchers found that beavers played a dominant role in determining the amount of wetland habitat, regardless of the amount of rainfall. “The presence of beaver explained over 80 percent of the variation in the area of open water,” Hood said. “Even during extreme drought, beaver were able to mitigate against wetland loss.”

The results appear in the February issue of Biological Conservation.

Given the area’s isolation and lack of permanent streams, Hood said, the beaver’s ability to manage water was remarkable, even during extended dry periods. Beavers built small dams to block seepages and deepen ponds, and they worked to connect areas of open water. “During the drought , they spent a considerable amount of time digging channels throughout the wetlands, much like farmers dig drainage ditches to collect the water in their fields,” Hood said.

To be sure that beaver were actually creating—rather than simply being attracted to—shallow wetland lakes, Hood’s team also focused on areas where beaver occupancy changed over the 54-year period. When beaver were present, ponds showed a nine-fold increase in open water area, compared to periods when beaver were absent from the same locations.

Given their findings, Hood and Bayley argue that removing beavers should be recognized as a form of wetland degradation comparable to infilling and draining. Their conclusion is echoed by ecologist David Cooper at Colorado State University in Fort Collins. The new research “provides compelling reasons for the conservation and reintroduction of beavers into areas of North America where they were extirpated by trapping,” Cooper said.