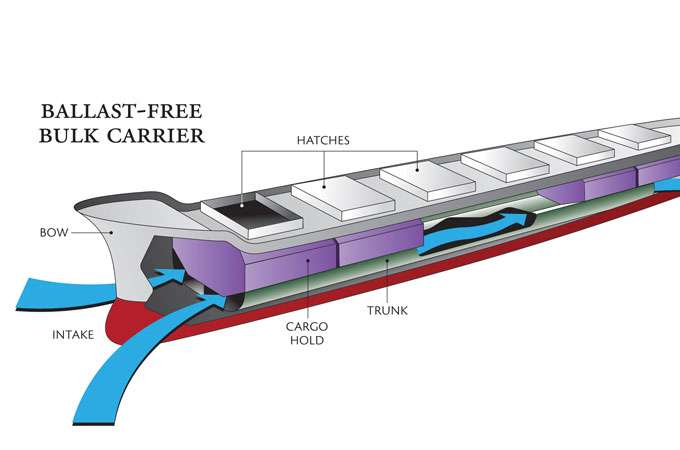 From zebra mussels to mitten crabs, some of the worst invasive species to hit American shores have arrived in the ballast tanks of cargo ships. Together, these species have fouled beaches, shut down river locks, led to local extinctions, and cost taxpayers and companies billions of dollars. Now, University of Michigan naval architect Michael Parsons has designed a ballast-free cargo ship that would stop most aquatic species from hitching rides around the world.

Before they leave port, ships fill ballast tanks with water in order to keep the vessel stable when it enters the ocean. Sea creatures can enter along with the water and then are expelled when the ship empties the tanks at its next destination.

Parsons first conceived of his solution to this aquatic hitchhiking nearly a decade ago, when he was on a committee formed by the National Research Council to address the ballast-water problem. After months of telling environmentalists on the committee that ballast tanks were a necessary part of the shipping industry, he began questioning the practice himself. “It troubled me for most of the next year,” he says, “until I came up with the design for the ballast-free ship.”

Instead of tanks, Parsons proposes placing long, wide pipes internally along the length of a ship’s hull. Hatches cover the ends of these pipes to seal them off from the surrounding ocean. Each time the crew needs to weigh down the ship, all they have to do is open the hatches. Water then runs through the pipes, creating a slow-moving stream through the ship’s bottom.

“The water will change over about once per hour,” says Parsons. “So it would always be local water in the .”

Parsons has built a model of the ballast-free ship’s hull and run computer simulations of the ship’s internal systems to prove that his design works. The biggest obstacle now is cost—going ballast-free would add hundreds of thousands of dollars to the price of a new vessel. But the International Marine Organization (IMO), which oversees commercial shipping worldwide, is considering a regulatory change that could turn the tide.

The IMO may soon require that cargo ships install complex, expensive sterilization systems in their ballast tanks. It might be more expensive to add those systems than to go ballast-free, a reality that could finally force shipbuilders to take notice of Parsons’ design.

The ballast-free system uses broad pipes to stream water through a ship’s hull, eliminating the need for ballast tanks that transport invasive species. Illustration courtesy of University of Michigan.

Illustration courtesy of University of Michigan