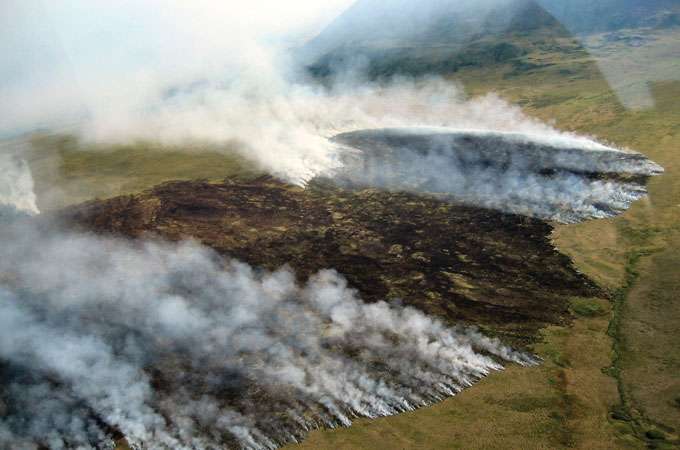 In Arctic tundra ecosystems today, fires are relatively rare. For instance, only three percent of Alaskan tundra burned between 1950 and 2005, a far lower percentage than what is seen in most boreal forests. But when conditions are right, tundra vegetation can be highly flammable, as proven by last year’s enormous Anaktuvuk River Fire—the largest ever recorded on Alaska’s North Slope.

Now, by looking at tundra fires throughout history, a new study finds that the Anaktuvuk fire may be an ominous sign of what’s to come. By making the tundra more hospitable to shrubs, global warming would also make it more prone to burning, which could add vast amounts of CO2 to the atmosphere.

Most tundra ecosystems today are dominated by grasses, herbs, and dwarf shrubs. Tundra fires are rare because there is very little fuel to burn in these low-biomass communities. But paleoecological data from around the end of the last ice age paint a different picture. A research team led by Montana State University’s Philip Higuera studied charcoal and pollen deposits preserved in sediments in four lakes in Alaska’s Brooks Range. The sediment cores show that, for a 4,000-year period beginning around 14,000 years ago, grassy tundra was largely replaced by birch-shrub thickets.

With this new, continuous layer of woody fuel in place, fires became far more common than they are in today’s tundra environments, even though temperatures were much lower. The reason is that the combination of abundant fuels and low moisture overwhelmed the fire-dampening effects of cooler temperatures, Higuera says. The findings were reported in the journal PloS One.

Today, both temperatures and fuel loads are on the rise as willow, alder, and birch shrubs expand northward. Previous studies have predicted a return to a mostly shrub-dominated tundra in another 100 years, along with warmer and drier conditions. In turn, Higuera’s team concludes that a return to a more frequent tundra fire cycle not only appears likely but could also accelerate the pace of global warming.

Many scientists are already concerned that the thawing of Arctic permafrost will lead to the release of additional greenhouse gases. By releasing the ancient carbon locked up in soils in permafrost, frequent tundra fires would add yet another positive feedback loop to this process.