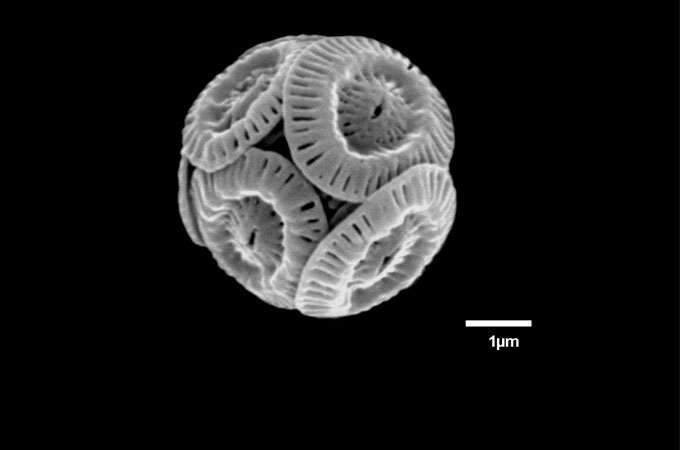 The consequences of an atmosphere loaded with carbon dioxide go well beyond global warming. One of the most alarming predictions is a dramatic rise in the acidity of seawater as the oceans absorb atmospheric CO2. Multiple experiments have now shown that acidity levels predicted to occur by the end of this century may be particularly harmful to calcifying marine organisms—those that produce hard skeletal structures made of calcium carbonate. Several studies have predicted that acidic seas will soon make calcification impossible for reef-building corals, causing the reefs to slowly erode away.

The most prolific calcifiers in the oceans, however, are not corals but a type of phytoplankton known as coccolithophores, which produce calcium carbonate scales called coccoliths. A new study in Science finds that, in jarring contrast to other calcifying species, the most globally significant coccolithophore—known as Emiliania huxleyi—appears to thrive under more acidic conditions.

A team led by M. Debora Iglesias-Rodriguez of the University of Southampton, U.K., conducted the study. As part of its research, the team evaluated microfossil deposits and found that E. huxleyi has increased individual calcium carbonate production by about 40 percent since the industrial era began.

In addition to the fossil study, the researchers simulated expected changes in seawater chemistry by bubbling CO2 through tanks containing colonies of E. huxleyi. When CO2 levels were raised to those expected by the year 2100, the phytoplankton responded by doubling their rates of both photosynthesis and calcification. Photosynthesis was stimulated by CO2 fertilization, but the mechanism behind the unusual boost in calcium production remains unclear. Coauthor Paul Halloran of the University of Oxford said the explanation may be that coccolithophores and corals draw on different sources of carbon for their mineral production. As CO2 concentration rises, the carbon source favored by coccolithophores—bicarbonate ions—increases, while the availability of carbonate ions favored by corals goes down.

The findings raise new questions about how phytoplankton may impact the exchange of carbon between the atmosphere and the oceans. While coccolith production freezes some carbon in mineral form, it also releases new CO2 into the oceans, some of which enters the atmosphere. The previously expected reduction in calcification by phytoplankton was therefore expected to slow the rate of greenhouse gas buildup—a benefit that now appears unlikely. But the experiments show that as increased calcification releases more CO2, increased photosynthesis consumes the gas in equal measure. “Coccolithophore production of organic and inorganic carbon increases under elevated CO2 in the same proportions,” Halloran said. “t appears that changing coccolithophore growth will cause no net change in atmospheric CO2 flux between the atmosphere and oceans.”