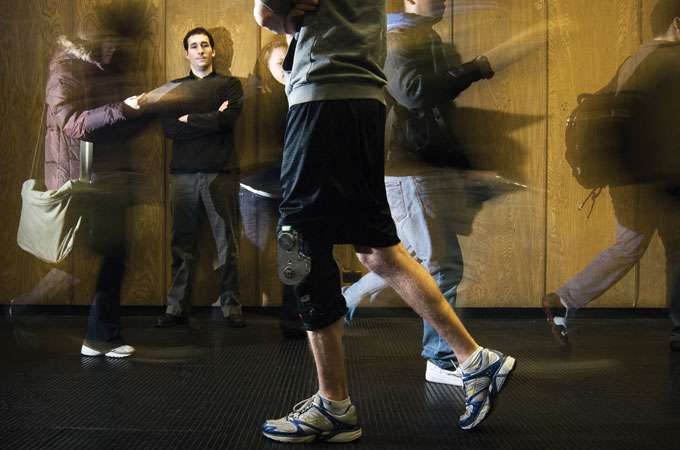 Max Donelan is giving new meaning to the term “power walker.” An assistant professor at Simon Fraser University and chief science officer at Bionic Power Inc., Donelan and his colleagues have developed an ingenious new device that, by harvesting electricity from the human stride, could power everything from flashlights to prosthetic limbs —and, in the process, help phase out the toxic batteries used by backpackers and field researchers.

Worn like a knee brace, the device captures energy from a critical moment in a person’s stride. Each time someone steps forward, they slow down their leg before planting their foot. Donelan’s device captures the energy used during this slowdown phase, then translates it into electricity via a miniature generator. The process is similar to how hybrid cars generate power each time the brakes are applied.

Donelan and his codevelopers at Simon Fraser University, the University of Michigan, and the University of Pittsburgh originally published their research in Science and expect their invention to be used initially for medical applications. For instance, it could supply power to cutting-edge devices such as mechanical limbs or implanted drug pumps.

Eventually, Donelan hopes, the device will help eliminate the need for the nonrechargeable batteries used by hikers, field researchers, and others to power gizmos such as GPS units. “Those batteries end up being in landfills and ultimately hurting our environment,” Donelan says.