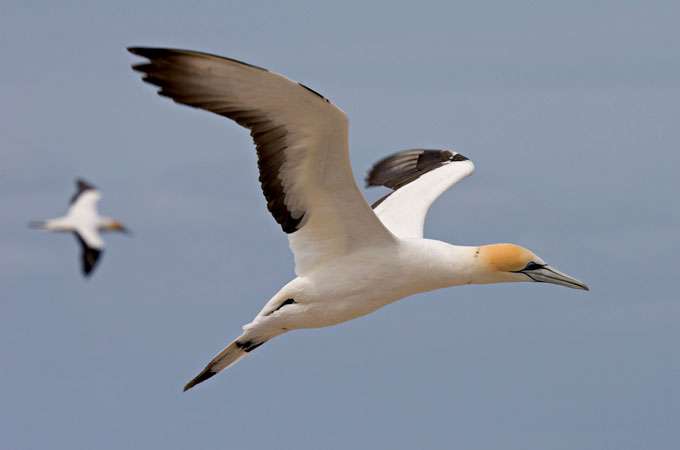 Scenes of noisy seabirds flocking behind fishing vessels are common the world over. The boats dump huge volumes of dead and unwanted fish overboard, and birds pluck easy snacks from the rejects. Many people have suggested that this cornucopia of convenience food could rescue some ailing populations of marine predators facing shortages of natural prey. But this optimistic assumption ignores grave problems, warns a new study in Proceedings of the Royal Society.

The case in point is the Cape gannet (Morus capensis). Some 50,000 of these seabirds live along the coasts of South Africa and Namibia, where they supplement their diets with hearty helpings from the region’s active hake fishery. Despite this abundant food source, most Cape gannet chicks die before leaving the nest, which helps explain why the birds’ overall numbers have dwindled by half in recent decades.

According to the new study, the high death rate can be blamed on what amounts to a junk-food crisis. Discards from hake trawlers have only half the calories of the anchovies and sardines that Cape gannets normally hunt. That’s not a problem for nonbreeding adult gannets—they can survive on the low-calorie fare. But the adults who are breeding must consume a whopping 28 percent more calories than usual to keep just one chick alive and healthy, and they simply aren’t getting enough fuel to sustain their young.

The breeding failures aren’t for lack of trying. The new findings corroborate previous indications that the birds hunt live fish whenever they’re available: In an attempt to provide chicks with healthy fare, Cape gannet parents made twice as many hunting dives and stayed underwater twice as long as nonbreeding adults, according to depth loggers strapped to a random selection of birds. Later analysis of the birds’ regurgitated stomach contents revealed that, despite these efforts, trawler waste still accounted for a majority of their diet. The researchers’ conclusion: Most breeding gannets simply cannot find enough high-quality sardines and anchovies to make up the extra calories they need to feed a chick.

South African fishing authorities are beginning to address health-food shortages for the Cape gannet and other top predators—for example, by setting quotas on the region’s overexploited sardine and anchovy stocks, says the study’s lead author, David Grémillet of the Centre National de la Recherche Scientifique in Montpellier, France. But Grémillet cautions that standards are still too low in Europe, where the northern gannet (Morus bassanus) faces a similar junk-food crisis.