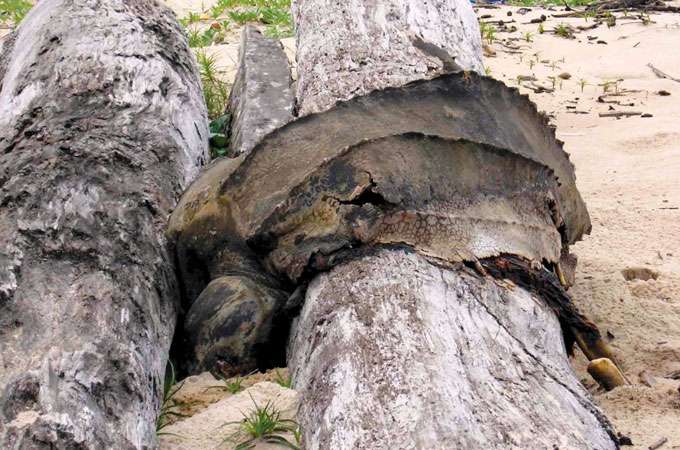 Stopped in Their Tracks

When Smithsonian biologist Bill Laurance traveled to Gabon to investigate the impact of logging on the rainforest, he was taken aback by how deforestation had altered not only the forest, but also the coast of the small central African country. Thousands of errant logs from inland timber operations had made their way down Gabon’s rivers and onto the shore, transforming some beaches into rotting lumberyards.

Laurance knew the beaches were key nesting grounds for endangered leatherback turtles, and he kicked off an extensive research project to determine whether the logs had become yet another turtle threat.

The project’s results, published in Oryx, reveal that the logs are hindering or killing a significant number of nesting turtles in Gabon—the majority of which are leatherbacks. What’s more, logging’s impact on coastal wildlife may extend far beyond turtles and central Africa. As logging increases across the tropics, its deleterious effects could spill over into coastal areas worldwide, threatening everything from coral reefs to crocodiles.

In Gabon, the problem starts in the rainforest, where timber companies cut down trees, tie them into log rafts, then float the rafts downriver to coastal towns. Many of the logs go astray because they either accidentally become detached or are deliberately cut loose by logging companies, who can collect insurance money for lost timber.

By inspecting aerial photographs of Gabon’s beaches, Laurance’s team concluded that over 10,000 logs were stranded ashore. Many of them are clumped around the two biggest turtle-nesting beaches, at Pongara and Mayumba. At Pongara, logs ran lengthwise along 30 percent of the beach.

To determine whether these logs were hindering turtle nesting, Laurance teamed up with Aventures Sans Frontières, an organization that maps turtle tracks and nesting sites as well as logs and other obstacles. Their data indicate that some of the turtles, between one and four percent, ran into the logs and decided to head back into the ocean to look for another location. The logs caused another six to nine percent to nest dangerously close to the ocean, where water can drown the eggs.

Meanwhile, some adult turtles who managed to scramble over the logs were found dead, entangled in the timbers. Others were discovered disoriented behind the logs, unable to see their way back to the ocean.

All told, roughly eight to 14 percent of the 294 turtles nesting at Pongara in the 2003–2004 season were impeded or killed by the logs. Laurance believes the same thing is occurring on beaches all along Gabon’s coast.

The only feasible solution would be to remove the logs by using bulldozers, which could easily make things worse. Not only could these machines rip up the beaches, but new roads would also have to be built to allow bulldozer access. Given the Gabonese people’s taste for turtle eggs, such an easy pathway to the nesting grounds could prove disastrous to leatherbacks.

As logging increases throughout the tropics, the number of logs making their way to coastal areas will grow, and Laurance believes the logging will harm far more marine species than just the turtles. Before landing on the beaches, logs will often pitch and roll in the surf. Such logs have been known to kill crocodiles and people in Gabon and bang up coral reefs and clam beds in other parts of the world. “Basically, anything that gets in their way is turned into mush,” says Laurance.