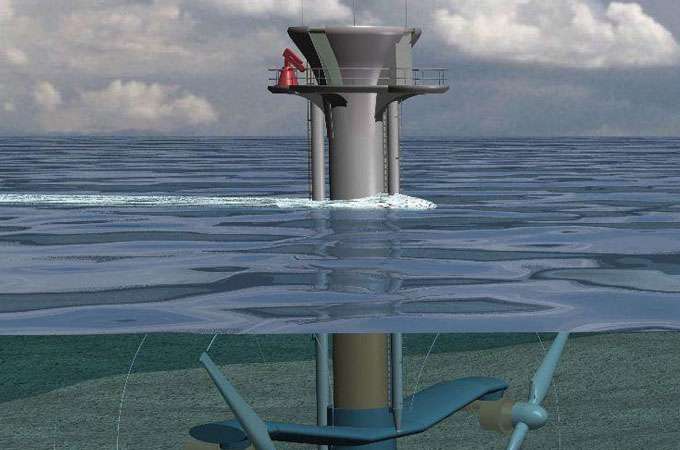 Hydroelectric turbines would be a terrific form of carbon-free, renewable energy—if they weren’t encased in dams that devastate fish populations, change the course of rivers, and flood untold acres of arable land. Fortunately, innovators such as Swiss-born inventor Philippe Vauthier have been busy trying to separate turbines from dams and have developed a new class of stand-alone, underwater generators that could be powering homes within a year.

Vauthier’s invention, dubbed the Underwater Electric Kite, resembles two exhaust fans stuck together and comes in several sizes, the smallest being eight feet tall. The turbine is tethered to a river bed or the sea floor, then suspended in a current like a balloon in a strong wind. As the current spins the device’s two blades, their motion is converted into electricity by an internal generator.

Individually, these free-flow turbines generate nowhere near the same amount of power as those in, say, Hoover Dam. But the smaller turbines could be peppered across waterways to achieve similar results. The reason: a dam sits alone in a single place, so it captures a current only once. A number of stand-alone turbines, on the other hand, could be positioned downstream from each other to capture the same current multiple times. In the Yukon River, for instance, where Vauthier is installing his first commercial machine next year, upwards of 20 turbines could be stationed along a 180-meter span and still run efficiently. Each turbine would power 40 homes.

Vauthier’s turbine is not the only one being put into operation. The so-called helical turbine, developed by Northeastern University’s Alexander Gorlov and resembling the business end of a cake mixer, is scheduled for installation in South Korea. Later this year, the British firm Marine Current Turbines Ltd. plans to erect a twin- propeller turbine off the coast of Northern Ireland, where it will tap the power of tides.

One concern is whether the turbines will injure fish. While scant research has addressed this question, Vauthier says nets will be erected to keep fish away from the turbines. If the fish make it past the nets, he believes, they will be able to maneuver between the blades. “Fish are not stupid,” Vauthier said. “Generally, they swim on the side of the river away from the turbine.”