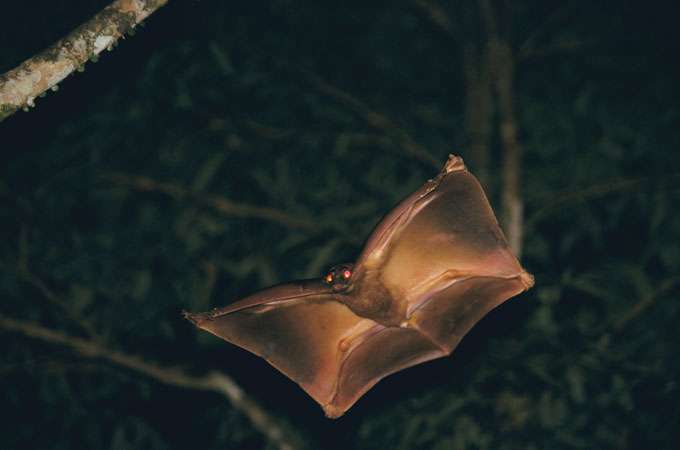 When it comes to aerial prowess, the colugo—a.k.a. the “flying lemur”—could give Rocky the Flying Squirrel a run for his money. To get from tree to tree, the colugo uses the skin between its limbs like makeshift wings, gliding as far as 110 meters at a time. Along the way, it can knock off an array of complicated stunts, such as squeezing through tangled branches without slowing down, or making 90-degree turns in midair. Now, a University of California researcher has developed a way to monitor the animals that is nearly as dramatic as the flights themselves: a tiny, high-tech “backpack” that stays glued to the colugos while they veer through the canopy.

The device was developed by Greg Byrnes, a graduate student at University of California, Berkeley, who is studying colugos in Malaysia. Three centimeters long by one centimeter wide, it contains motion-detection sensors, which keep a detailed log of the animals’ movement. To affix it, Byrnes and his team must first capture the animals and shave small patches of hair off their backs. They then attach the instrument to that patch, using temporary glue. After about a week, the glue gives out and the device falls off, allowing the researchers to retrieve it and analyze the data inside.

Byrnes set out to use the device to research the biomechanics of colugo flight, but he now anticipates the backpack will also help monitor how the animals respond to habitat changes. With deforestation in Southeast Asia on the rise, Byrnes thinks colugos’ flight and movement patterns may shift in the face of new dangers from humans and predators. “These are things that could subject to a more marginal existence,” Byrnes said. “It’s important to know how they react.”