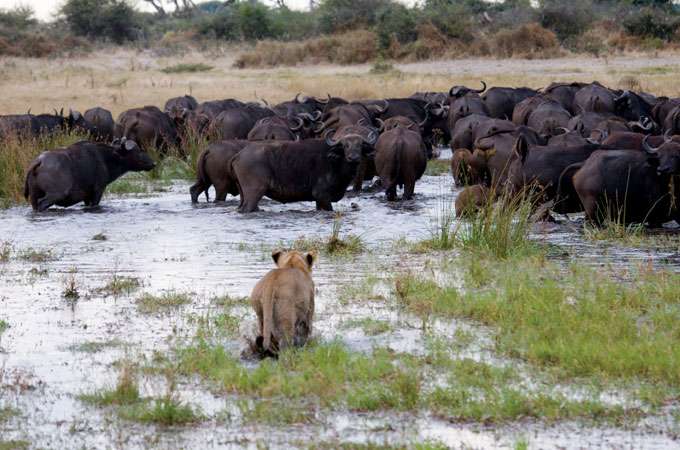 Closing in on a Killer

Studies of disease ecology have shown that shifts in climate can alter relationships between disease-causing organisms and their animal hosts, thus leading to unexpected epidemics. A new study of lions in Africa, appearing in PLoS ONE, shows how a complex set of factors triggered by extreme drought helped transform a normally benign parasite into a deadly killer.

Lion populations in the Serengeti experienced unprecedented mortality during canine distemper virus (CDV) epidemics in 1994 and 2001. But CDV is not normally fatal to lions, making the die-offs hard to explain. A team led by Linda Munson of the University of California, Davis, set out to unravel the mystery.

The researchers studied blood samples collected from Serengeti lions over a 20-year period, including the 1994 epidemic in which roughly a thousand lions died. The researchers also studied lions from a 10-week period in 2001, in which the Ngorongoro Crater lion population lost 24 of its 61 members.

In both cases lions showed depressed immune systems, consistent with CDV infection. But they were also lethargic and severely anemic and showed high levels of the protozoan parasite Babesia in their blood. Strangely, evidence suggested the parasitic infection was a major contributor to the lion die-offs, even though Babesia doesn’t normally affect the animals’ health.

Study coauthor Craig Packer of the University of Minnesota said the pattern suggested a rare and deadly interaction between two conditions that are normally benign. “CDV by itself apparently inflicts no mortality in the lions,” Packer said. “High levels of Babesia also apparently inflict no mortality. But the combination of the two caused about 40 percent mortality.”

In seeking to understand how the combination came together, the researchers focused on another factor that the 1994 and 2001 events had in common: both occurred near the end of periods of severe drought. Babesia is transmitted by ticks, and tick populations on the Serengeti soared during the long dry spells as herbivores became sick and malnourished. Packer says lions probably acquired huge parasite loads by feeding on tick-infested Cape buffalo, which had become easy prey due to the drought. “The tick exposure coincided with the CDV,” Packer said. “It was the alignment of events that proved devastating.”