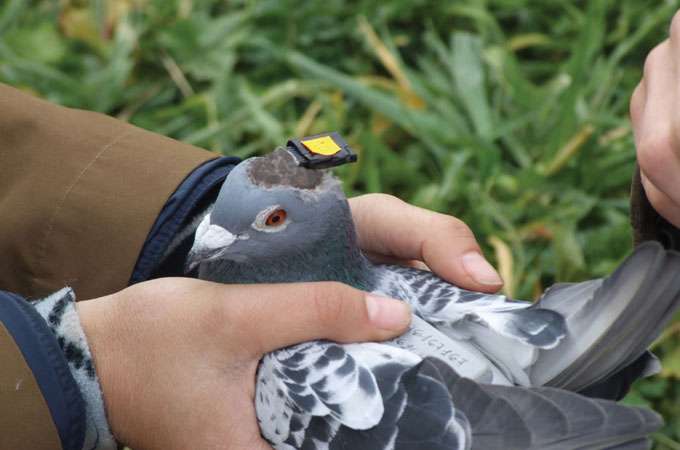 Alexei Vyssotski’s search for a new way to monitor animal brain waves began in 2002 when he was trying to figure out how homing pigeons, Columba livia, navigate.  A researcher at the University of Zurich, Vyssotski wanted to see how the birds’ brain activity changed when they encountered landmarks.  But he needed a device that could be attached to free-flying birds, and existing brain-wave monitors were too cumbersome.

Six years later, Vyssotski is perfecting a solution: a small high-tech device that is portable enough to monitor everything from tigers to mice and can provide valuable new information about how animals interact with their environment.

Dubbed the “neurologger,” the apparatus weighs around two grams and contains a tiny memory card.  To use it, researchers immobilize an animal and then attach electrodes, the neurologger, and a locator beacon to its body.  The device then records how brain waves change as the animal moves through its habitat. When the batteries run out, the researchers recapture the animal, retrieve the memory card, and sift through the data.

The neurologger has been tested on pigeons and is ready to be used in a variety of experiments, including one to determine whether frigate birds, Fregata minor, sleep during long-distance flights.  According to Vyssotski, understanding this and other behaviors will help scientists see not only how animals operate but also what environmental conditions are necessary for them to flourish. ❧