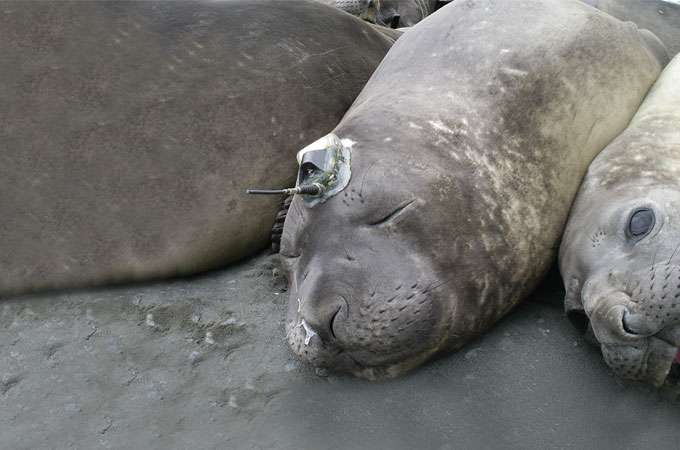 Move over, Flipper. Southern elephant seals (Mirounga leonina) have been drafted into the fight against climate change and are helping scientists unravel key mysteries about the most remote waters on earth.

As detailed in Proceedings of the National Academy of Sciences, a team of international researchers, including Jean-Benoît Charassin of the Paris Natural History Museum and Mark Hindell of the University of Tasmania, has started outfitting the seals with a device that turns them into mobile monitoring stations. Glued to the animals before they leave on months-long foraging journeys, the cell phone-sized device contains sensors that monitor a seal’s location, keep track of how deep it dives, and record data on water temperature and salinity.

Because the elephant seals cover thousands of square kilometers each winter, sometimes diving hundreds of meters below the Antarctic ice sheets, their forays deliver information on areas that can be impossible for ships or buoys to penetrate. For instance, frigid polar conditions have prevented scientists from accurately measuring how much sea ice forms during a particular year—a critical question because the ice reflects sunlight back into space. The salinity data gathered via the seals can be used to infer sea-ice quantities, establishing baselines that will help measure future increases or declines.

Now, the researchers plan to extend their work to the Arctic regions and have set their sights on using additional seal species in order to maximize the territory they cover.