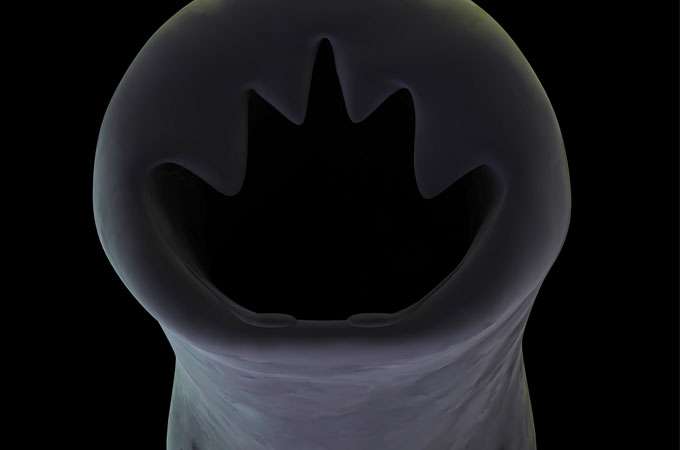 The Most Popular Lifestyle on Earth

Forget lions, tigers, and sharks. The billions of tiny parasites that make a living castrating and brainwashing their hosts may be the new kings of the food web.

Every science has its icon. Genetics has the double helix of DNA. Particle physics has the spiraling tracks of electrons and protons. And if you had to sum up modern ecology in a single picture, it would be the dense mesh of arrows and circles that represents the food web.

The food web’s structure helps ecologists unravel how ecosystems function—whether species go through wild population swings or stay relatively stable. On the Serengeti, for example, acacia trees and grasses form the base of the web, with arrows rising to plant-eaters such as grasshoppers, mice, and gazelle. Each herbivore is in turn eaten by its own set of predators. You don’t have to be an ecologist to recognize the lion’s place in the food web. It’s the king of the jungle, the top predator.

Or is it? Ecologists are beginning to understand that the traditional picture of the food web is missing a vast menagerie of invisible creatures—creatures that might exercise far more control over an ecosystem than even the top predators. Every ecosystem is loaded with tiny parasites—viruses, bacteria, protozoans, fungi, and animals—invisibly feeding on just about every living thing. The Serengeti’s lions, for example, are the sole host to 31 species of worms and flukes, along with two species of bacteria, two arthropods, six protozoans, and ten viruses. In fact, a recent study in Nature found parasites to be so plentiful that, in terms of biomass, they actually outweigh predators in some ecosystems—sometimes by a factor of 20. (1)

Now, for the first time in the history of ecology, a few forward-thinking scientists are pulling parasites out of the shadows and incorporating them into food webs. When they do, the webs then take on a dramatically new look. Parasites are often regarded as a scourge on nature, but—as counterintuitive as it may seem—they may actually keep ecosystems healthy. They may control how top predators coexist with their prey. And when ecosystems begin to suffer, parasites are often the first ones to feel the effects—leading some scientists to believe the tiny creatures could form an early warning system for ecosystems in trouble.

Ecologists first began to draw food webs in the early 1900s. The pictures served mainly to summarize what they knew about who ate whom in a particular ecosystem. But in recent years, scientists have turned food webs from pretty pictures into scientific tools for understanding how species work together as ecosystems.

One of the main challenges to understanding how food webs behave is drawing the web in the first place. Ecologists need to observe which species are eating which. In some cases, a single species of prey may be the main source of food for a predator; other predators may prefer to liven up their diet with many species. But a perfect picture of a food web would be too difficult to assemble and too difficult to analyze. So ecologists have had to decide how much detail they can live without. Until the 1990s, they universally agreed that parasites could be ignored. Parasites seemed like little more than hangers-on, with no significant effect on the food web of their hosts.

Then, in 1997, two Canadian biologists, David Marcogliese and David Cone, published a paper titled “A Plea for Parasites.” (2) Parasites, they argued, might well play a pivotal role in food webs. Some of them were deadly, thus controlling populations of predators and prey alike. Others didn’t kill their hosts but lived inside them, feeding on their food and diverting energy that might produce more hosts. And many parasites needed to live in more than one species of host throughout their life cycle—in other words, they moved through the food web. To say parasites didn’t matter to food webs seemed absurd.

Marcogliese and Cone knew it wouldn’t be easy to rectify the problem. Parasites may be the most successful life form on Earth, but scientists know relatively little about them because they’re so hard to study. Documenting parasites requires years of dissections, of careful study with microscopes, of experiments. “It’s an enormous amount of work,” Marcogliese says.

Given how little we know about parasites, answering Marcogliese’s plea might have seemed like an impossible task. Unless your name is Kevin Lafferty. Lafferty, who runs a marine lab at the University of California, Santa Barbara, is a marine ecologist with the US Geological Survey’s Western Ecological Research Center. When he read Marcogliese and Cone’s paper, he did not think it folly. He thought, “We can do that.”

Lafferty—blond, tan, lean—looks like a California surfer. That’s because he is—he’s been surfing the California coast since he was a teenager and still tries to catch a wave most days, now that he’s a professor. And when Lafferty wasn’t surfing as a kid, he was exploring tide pools, snorkeling, and scuba diving. It was then that he became fascinated by food webs, from grazing sea slugs to top predator sharks.

But when Lafferty started graduate school at Santa Barbara, his vision was radically changed by a class on parasitology. Armand Kuris, then his teacher and now his collaborator, revealed to him the vast, complex world of marine parasites that Lafferty could not see on his dives.

Spurred by Kuris, Lafferty set out to understand the parasites in a single ecosystem very well. He chose the Carpinteria Salt Marsh, a sliver of wetlands along the California coast near Santa Barbara. Over the years, he and his colleagues created a relatively complete list of parasites in the marsh, thanks not just to their hard work but to the simplicity of the wetland ecosystem. Most of the photosynthesis taking place in the marsh is carried out by algae, which are grazed by snails and other invertebrates. A few species of fish live in the flooded areas of the marsh, feeding on the invertebrates, and they in turn are eaten by water birds.

When Lafferty read Marcogliese and Cone’s paper, he realized that he was in the rare position of knowing an ecosystem well enough to construct a food web complete with parasites. But despite all their previous research, it still took years for Lafferty and his colleagues to complete the project. They had to scoop up thousands of snails and dissect them; they had to analyze sea water for free-living parasites; they had to figure out which birds ate which invertebrates.

These days, whenever Lafferty talks to an audience about his food web project, he first shows the Carpinteria food web without parasites—a typical maze of arrows between algae and grazer, between predator and prey. Then he switches to a slide with the parasites added in and the audience is shocked. “When you show the parasite links added in, they totally overwhelm the predator-prey links,” Lafferty says.

Among the parasites that dominate the Carpinteria food web are flukes, flatworm-like invertebrates related to tapeworms. Flukes start their lives in snails. In a diabolical twist, they castrate the snails, so that the resources the hosts might direct to reproduction can instead go to sustaining the parasite. Flukes can take up as much as one-third of the body mass of a snail, and 17 species of flukes in the salt marsh can live in a single species of snail.

After flukes develop, they escape into the water in a free-living stage as cercariae. Cercariae swim in search of their next host (in this case, fish). The marsh, Lafferty and his colleagues have shown, positively seethes with these free-swimming parasites. He estimates that the cercariae outweigh all the birds of the marsh. In other words, more of the sunlight that strikes the salt marsh ends up as parasite biomass than bird biomass. It also means that there’s an important food source for other animals in the marsh that Lafferty never appreciated before: free-swimming flukes.

Now Lafferty and other researchers are investigating other ecosystems to see whether their food webs resemble Carpinteria’s. The early results indicate they do. Lafferty and Kuris have collaborated with Norwegian scientists from the University of Tromsø to draw the food web for a lake in Norway near the Arctic Circle. They find once more that parasites dominate the links of the food web. It’s now clear, Lafferty argues, that if you ignore parasites in an ecosystem, you can’t understand the patterns in that system’s food webs.

The question researchers now want to answer is what effect the parasites have on food webs. Would ecosystems behave differently if there were no parasites? Some research suggests they would.

At the Carpinteria salt marsh, for example, parasites help the predators find food. Many flukes in the wetlands need to get from fish into birds in order to mate and produce eggs. The birds, which do not get sick from the parasites, shed the fluke eggs with their droppings. Lafferty has found that when one species of fluke, Euhaplorchis californiensis, infects a killifish, the fish begins to swim jerkily near the surface of the water, flashing its silver scales. This behavior makes it easier for birds to spot the fish and catch them. Lafferty estimates that an infected fish is 10 to 30 times more likely to be eaten than a noninfected one. Take away the parasites, and you might well make it much harder for birds to find food. There would be fewer birds in the salt marsh, and the change in their population would affect the population of other animals in the food web.

By killing or castrating other hosts, parasites may also help keep ecosystems from flying out of control. If the population of a species expands quickly, it may threaten to exhaust its food supplies. But its parasites will expand their numbers as well, driving down the population of their host. Yet parasites can rarely drive their hosts to extinction because, once their hosts become rare, they can no longer sustain their own population. “Parasites probably increase the stability of free-living species,” Lafferty says.

Lafferty doesn’t deny the risk that parasites can pose to wildlife, particularly when humans ship parasites to new habitats where hosts have not evolved defenses. In Africa, for example, Ebola viruses are pushing some gorilla populations to the brink of extinction. A fungus has been implicated in the disappearance of many frog species around the world.

Nevertheless, a healthy ecosystem is usually rife with parasites, and when the parasites begin to disappear, this may foreshadow serious problems. For example, Lafferty has found that the fish in pristine Pacific coral atolls carry many more kinds of parasites than fish living in nearby overharvested atolls. Marcogliese has found that when acid rain damages Canadian rivers, the parasites fall out of the river food webs even while their fish hosts seem in good shape. Pollution can kill delicate parasites outright, while overfishing may wipe out parasites by removing some of their hosts.

All of which could point to the need for an about-face within the scientific community. With so many ecosystems in turmoil, perhaps parasites’ absence—not their presence—is what should cause ecologists concern. “The time you really ought to be worried,” Lafferty says, “is when you go into a system and you don’t see any parasites at all.” ❧

Carl Zimmer is author of Parasite Rex, a regular contributor to The New York Times, and a columnist and contributing editor at Discover magazine.