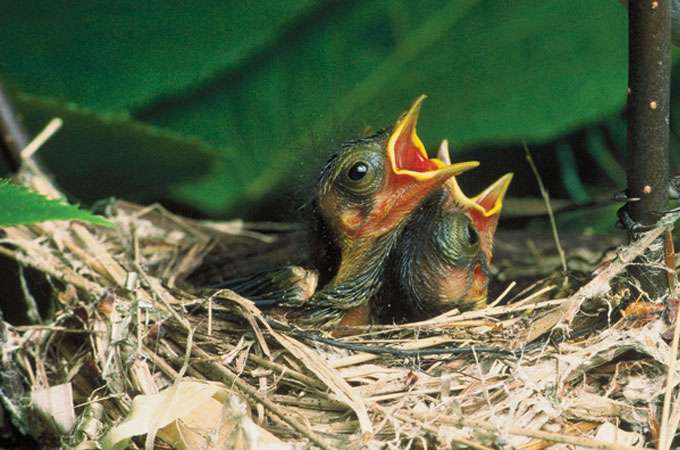 Much like people, birds looking to raise children like to settle down in neighborhoods that already have plenty of families. For years, scientists have believed that birds identify those “neighborhoods” (i.e., nesting sites) based solely on their vegetation. But a new paper in Proceedings of the Royal Society, Series B, threatens to upend this belief by finding that some songbirds’ nesting decisions are driven by the sounds they hear, not the plants they see.

Matthew Betts, the Oregon State University ecologist who led the study, first suspected a few years ago that conventional wisdom might be off base. “I noticed many species of songbird living in a way that couldn’t be explained by vegetation alone,” he said. “There seemed to be an inherent clustering, like we see people clustering in towns.”

Betts thought the birds might be selecting nest sites based on whether the songs of other birds indicated they had bred successfully. So he concocted a rather devious experiment involving the black-throated blue warbler. He and his team made recordings of the birds’ shrill song, then set up speakers along with decoy warblers at a number of spots across New Hampshire. Only one-third of these sites had good warbler habitat, which consists of plenty of shrubs and mature trees. Another third had mediocre habitat with mostly shrubs, and the final, lousy, third didn’t have any shrubs at all—easy pickings for predators.

Betts’s team set timers at all sites to broadcast the songs of successful breeders across the speakers at regular intervals from late July through August, when empty-nesters scope out breeding sites. Betts then packed his bags and headed back to the west coast for the winter. He returned to New Hampshire in May and found that nearly 60 percent of the sites with mediocre and lousy warbler vegetation were settled. “After we had this response I felt slightly guilty” for duping the birds, Betts says, “but this is not an endangered species. There are millions of them.”

Overall, Betts discovered that male warblers were four times more likely to set up camp in places where they heard bird songs, compared to sites with good vegetation alone. Betts believes that this behavior allows warblers and perhaps all territorial songbirds to quickly adapt to their surroundings. As global warming begins to alter the habitat of songbirds around the world, all that may be needed is a few pioneering souls to find alternative places to nest. Betts also thinks his technique could be used to draw certain birds away from areas where they are being a nuisance or are in danger. ❧