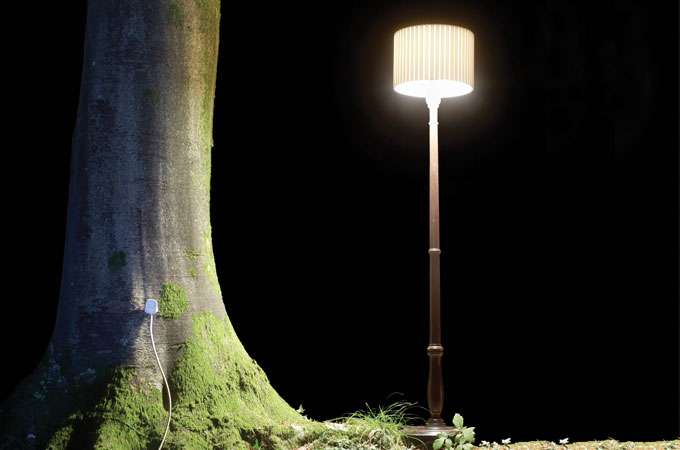 A Light in the Forest

One freezing day in February 2006, physicist Andreas Mershin huddled with others around a tree on the Massachusetts Institute of Technology campus to watch an unlikely demonstration. An engineering company claimed it could produce electricity simply by wiring a nail in the tree’s trunk to a metal rod in the ground. Sure enough, the demo worked—but nobody knew exactly why.

Two years later, Mershin and MIT undergraduate Christopher Love have not only figured out the source of the tree’s electricity, they’ve joined a new company—Voltree Power—that wants to use that energy to power wireless networks of environmental sensors.

As reported in PLoS ONE, the electricity stems from an acidity difference between trees and soil. The area that is more acidic contains a higher concentration of positively charged hydrogen ions. Those ions attract electrons, generating a tiny current that travels between the tree and the ground.

Using a device that extends probes underground, Voltree’s invention harvests the energy and uses it to continuously recharge a battery, which in turn powers radio-equipped sensors. Voltree is now working to assemble a wildfire alert network that can feed sensor data to a central location. The devices could also monitor climate conditions or even detect illegal radioactive materials at the border.

While other monitoring tools have been hampered by the need for costly solar panels or frequent battery replacements, tree-powered sensors could be deployed over vast areas with little maintenance. And not to worry, Mershin says: the amount of energy harvested is so tiny that the trees won’t feel a thing.❧