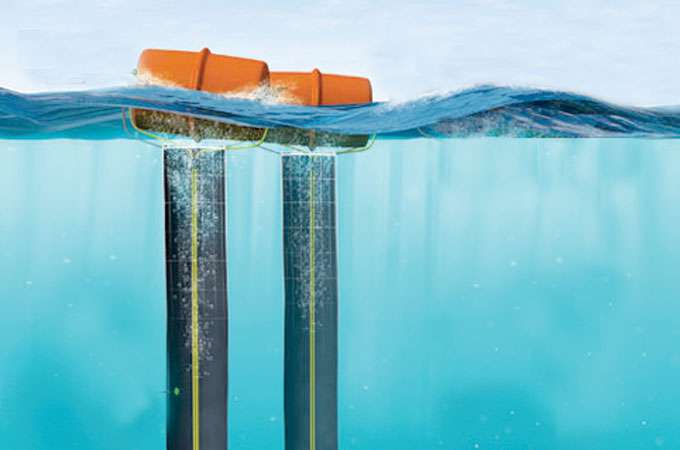 When Phil Kithil decided to help victims of Hurricane Katrina, he wanted to do something far more dramatic than donating money or building houses. Kithil, an entrepreneur and inventor, set out to devise a way to actually prevent future destruction by weakening hurricanes before they strike land. And his solution—a system of self-powered pumps that cool the ocean’s surface—could also soon address another pressing problem: the demise of coral reefs.

As sea temperatures rise, the abnormally warm water kills off colorful algae that help coral survive—a process known as coral bleaching. Kithil believes his pumps could prevent this by cooling the water surrounding reefs. The pumps themselves are surprisingly low-tech: a single pump consists of a long, plastic tube positioned vertically in the ocean, then held in place by a weight at the bottom and a buoy at the top. As the buoy bobs in the waves, the entire apparatus rises and falls, forcing cool, deep water up the tube and onto the surface.

Tests have shown that one pump can reduce surface temperatures by as much as four degrees Celsius. But that result covered only a small area; to see whether the method works on a larger scale, Kithil’s company, Atmocean Inc., will arrange several pumps around a test reef this summer. If effective, the system could be deployed as soon as Kithil finds investors to cover the cost.

At thousands of dollars per pump, the cost could be hefty, but Kithil says it might not be such a hard sell. That’s because the water pumped to the surface is not only cool, it’s rich in nutrients. This triggers plankton blooms that in turn absorb CO2. Kithil believes this will generate carbon offsets that can be sold on the open market, creating revenue, saving reefs, and delivering proof-of-concept for Kithil’s larger scheme: a rapid-response system that could drop swarms of pumps in hurricanes’ paths. ❧