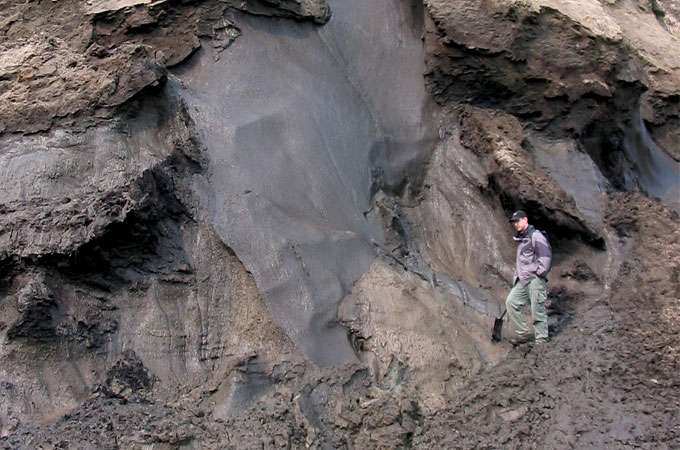 Permafrost keeps its cool—even in a warmed-over world

At northern latitudes, buildings are collapsing and roads are buckling as the permafrost beneath them thaws. But the frozen ground further below the surface is proving remarkably stable. A new study in Science reports the discovery of a 740,000-year-old ice wedge in Canada’s Yukon Territory. It’s the oldest-known ice in North America, and it remained in deep freeze throughout two geological periods that were warmer than today. This partially assuages one of climatologists’ worst fears: that thawing permafrost will cause troves of organic material to decompose, unleashing a “carbon bomb” that accelerates global warming.

The ancient, eight-meter-long ice wedge is buried just a few meters underground and was discovered by gold miners in the late 1990s. When the study’s lead author, geologist Duane G. Froese of the University of Alberta, checked it out in 2000, its shallow location led him to guess the ice was fairly young—maybe 50,000 years old. But colleagues at the University of Toronto determined that a layer of ash above the ice settled some 740,000 years ago. Anything below it must be older, which means the ice wedge survived two interglacial periods, including the latest, 120,000 years ago—when all the region’s permafrost was thought to have melted.

While shallow permafrost will likely melt and release greenhouse gases into the atmosphere, Froese’s research indicates the scale of this melting could be far smaller than current models predict. Froese contends that the ice he studied is probably not unique; it was found near the southern limit of permafrost in North America, in a zone where permafrost tends to be patchy, thin, and just a few degrees shy of melting. Since most permafrost is buried at least as deep as Froese’s ice, the bulk of the stuff may be far hardier than scientists had feared.  ❧