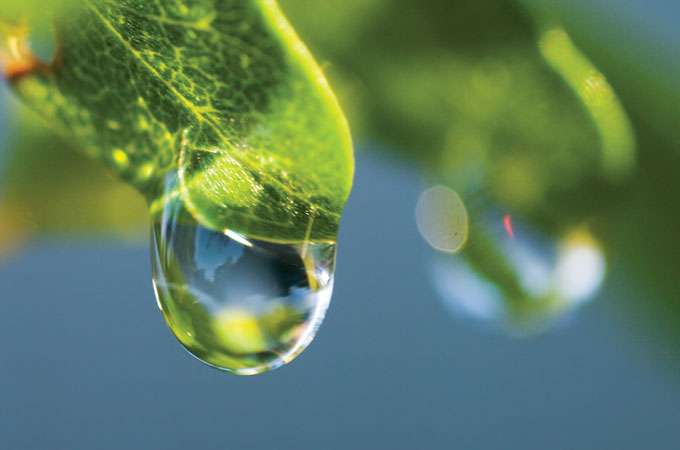 When water evaporates from a tree leaf, it triggers a chain reaction that can pull other water molecules all the way up the trunk of a 90-meter-tall redwood. Each molecule attracts the one behind it, creating a continuous stream from the roots to the leaves.

Now Michel Maharbiz, a researcher at the University of California, Berkeley, wants to harness that process to generate tiny amounts of electricity.

Maharbiz’s team has created a synthetic leaf about the size of a postage stamp that mimics the evaporation (or, more accurately, transpiration) of water from trees—but adds a twist to produce power along the way. The synthetic leaf is made of two glass plates, one etched with a network of minuscule branching tunnels. Each tunnel ends in an opening that simulates the pore on a leaf. When the device is filled with water, droplets evaporate from the openings and prompt the remaining fluid to move through the tunnels.

That movement alone doesn’t produce electricity. So the team placed two charged metal plates around the main tunnel and injected air bubbles into the water. When a bubble moved between the plates, it changed their electrical charge, resulting in a current.

The power output is small—less than one ten-thousandth the amount needed to run a cell phone. But the synthetic leaf could still be useful for recharging batteries in environmental or building sensors, says study leader Ruba Borno, who reported the work in Applied Physics Letters. The research team is now working to replace the manually injected air bubbles with plastic gears so the “leaf” can run continuously on its own. ❧
—Roberta Kwok