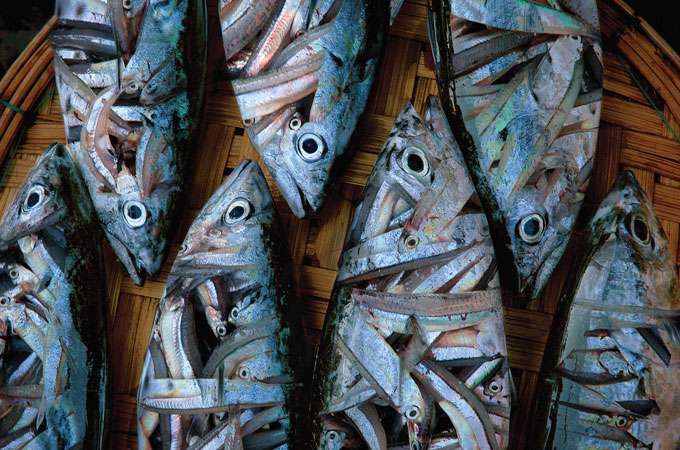 The aquaculture industry is mired in a dilemma. On the one hand, 2009 was a landmark year—for the first time, aquaculture provided a whopping 50 percent of global seafood supplies, up from just 25 percent in 1995. And that trend is bound to continue. With wild catch stagnant or declining, aquaculture will play a key role in meeting the seafood demands of a world population that’s zooming toward 8 billion. But a troubling reality looms: the aquaculture industry’s expanding hunger for wild fish, which it uses as feed, threatens the wild populations on which aquaculture depends.

Rosamond Naylor, a Stanford University economist, was looking for a way out of this dilemma when she recently convened an international team of scientists and policy experts. Naylor has spent much of her career studying aquaculture and other types of food production and wanted to forge a consensus on exactly how the industry should move toward sustainability. Now, in a paper in Proceedings of the National Academy of Sciences, Naylor and her colleagues map out not only how far the industry has come but also how much farther it must go.

First, the good news: since 1995, the proportion of wild fish that goes into each pound of farm-raised fish and shrimp has dropped dramatically. The bad news? Aquaculture production is rising so fast that the industry is still consuming more and more wild fish overall. With this in mind, the research team evaluated various plans for moving away from wild fish as a feed source.

One key question is how to ensure that farmed fish get adequate protein and fat in their diets. Wild omnivorous fish such as salmon and tuna get these nutrients from the fish they eat—usually anchovies, sardines, and mackerel. Most of the global catch of these smaller species is ground into fish meal (for protein) and fish oil (for fats) and is incorporated into feed pellets—not only for fish but also for pigs, chickens, and pets. And aquaculture’s share of these commodities has doubled over the past decade; the industry now consumes fully 68 percent of the world’s fish meal and 88 percent of its fish oil.

Naylor’s team concluded that the most-pressing issue is finding alternatives to fish oil. Not just any oil substitute will do, since it is specifically the long-chain omega-3 fatty acids such as DHA that make fish such a boon for good health. Easy-to-come-by substitutes such as canola oil provide calories but not the DHA.

Industrial fermentation processes for extracting the so-called healthy oils out of microalgae deliver some hope. They’re already being used to provide DHA supplements in juice and infant formula, and preliminary results for using the ingredients in salmon feed look promising. Australian scientists have also coaxed genetically modified canola to produce long-chain omega-3s. But both oil alternatives are still prohibitively expensive. “There’s not a silver bullet out there,” Naylor says.

A quick fix would be to eliminate fish meal in the diets of vegetarian fish such as carp and tilapia. According to the PNAS report, farmers have already reduced the share of fish meal in carp diets by 50 percent between 1995 and 2007; during that same period, the fish meal in tilapia diets dropped by nearly two-thirds. Yet tilapia and carp farmers fed their combined stock more than 12 million metric tons of fish meal—more than 1.5 times the amount consumed by all farmed shrimp and salmon.

Naylor’s team calls on policymakers to create incentives to encourage feed alternatives and improve management of the underlying fisheries. Without a concerted effort, though, the study’s take-home message is no different from the last line of a cautionary report Naylor published nine years ago in Nature: “An expanded aquaculture industry poses a threat, not only to ocean fisheries, but also to itself.” (1) ❧
—Sarah Simpson