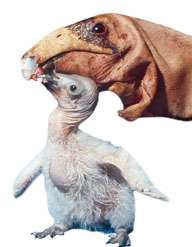 Cougars aren’t the only species that need adult supervision to keep them in line. When the California Condor Recovery Program began releasing the first captivity-bred condors in 1992, the young birds ripped apart cabins, tore windshield wipers off cars, and pestered humans for food. “They are naturally curious birds, but they didn’t have a healthy fear of or respect for humans,” explains Amy Utt, a PhD candidate at Loma Linda University who coauthored a 2007 study of how rearing methods affect condor behavior. (1)

The problem stems from parental guidance—or lack thereof. To produce as many chicks as possible in captivity, zookeepers use a technique called “double clutching”: when a female lays an egg, the keepers remove it so that she will lay a second one. The condor parents raise the chick that hatches from the second egg, but a human wearing a condor-like hand puppet raises the first chick.

Puppet-reared condors can fare well in the wild, but only if they do some growing up before they are released. Utt’s study found that more than one-third of the puppet-reared birds died in the wild, and 19 percent of them had to be recaptured because of behavioral problems.

One reason for the problems was that the birds were released when they were only six to nine months old. Normally, a condor stays with its parents until it is nearly two years old, learning how to fly and forage. Eventually, the parents kick out the youngster so they can lay a new egg.

With this in mind, the captivity program’s researchers changed their strategy. Now, most condors are not released into the wild until they are about 17 months old. This gives researchers time to house the puppet-reared juveniles with one or more other juveniles and an adult “mentor” deemed to have healthy behaviors.

The adult condor’s job is to teach the juveniles to act like condors—the adult’s aggressive behavior helps put the younger birds in their place. More important, the juveniles “learn by example that humans are not something you want to be around,” says Utt. Now that there are several established populations of California condors in the wild, released juveniles can continue to learn from adults until they reach maturity around age 5 or 6. Mentoring has proven to be an important factor in long-term survival, Utt says, and naughty behavior has decreased markedly.