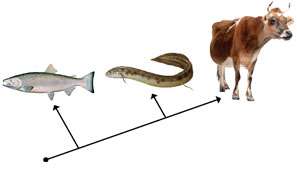 How is it that scientists could deny the reality of fish? Yet, absurd as it sounds, that is exactly what the scientists known as “cladists,” from the Greek klados  (“branch”), did in the early 1980s. Their goal was Darwin’s: to order the living world strictly according to evolutionary relatedness. That is, they resolved to recognize and name only those groupings of animals that were complete groupings of descendants of a single evolutionary ancestor, with no extra lineages thrown in and none left out—which seems sensible enough.

So how could such good sense have done away with fish? The cladists began by asking a simple question: What would the evolutionary tree of salmon, lungfish, and cows be? The answer, it appears at first glance, is simple. Salmon and lungfish, being fish, would cluster nicely together on one branch, and very non-fishy cows would be off on a separate branch. Right? Wrong. Contrary to what you might expect, what you see above is their evolutionary tree. Working up from the root, the lineage that leads to salmon branches off first. Keep tracing up the tree, and you’ll see that the lineage from which the salmon branched off eventually branches into two new lineages: the one leading to lungfish and the other leading to cows. In other words, a cow and a lungfish are more closely related to one another than either is to salmon. How could that be? It’s because lungfish are no ordinary fish. They are part of the lineage of fish that—with lungs and a host of other curious characteristics—dragged themselves landward and gave rise to any number of land-loving animals, including cows and even bears, dogs, birds, and ourselves.

Fine, you say; you can accept this tree. But once you do, if you agree with the cladists’ equally sensible insistence that all named groups be complete groups of descendants of one ancestor, you’ll see you’ve done in your precious fish. If you choose to describe fish as, say, all the animals descended from the salmon lineage, then you’ve left out lungfish. Oops. If you choose to include both the salmon and the lungfish, you’ll see that one descendant of that original fishy-fish that gave rise to salmon and lungfish likewise gave rise to the cow. Suddenly, you’re stuck with either having the fish include the cows and humans, which no one wants, or no fish at all. Hello, modern evolutionary science; goodbye, fish. ❧