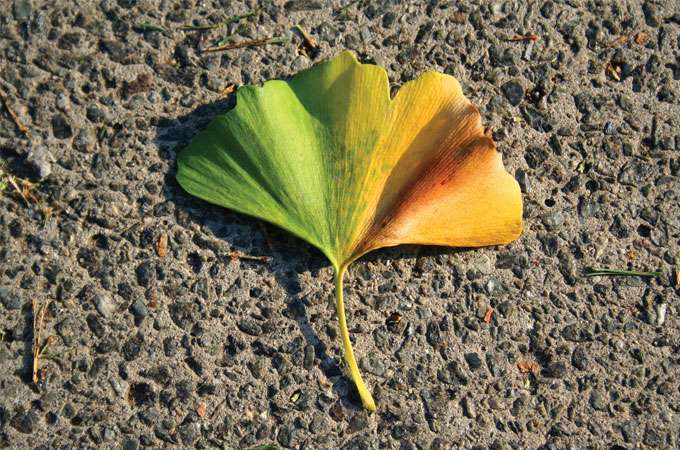 Ginkgo biloba embraces the sacred and the mundane like little else in our experience. Its most-ancient recognizable relatives are embedded in fossils more than 270 million years old. Ginkgo’s survival into modernity was not merely a matter of luck. It needed an arsenal of molecular and systemic weapons against disease, predators, and time. Ginkgo biloba has witnessed most of tree history, the proliferation of land plants, and their transformative effect on the carbon cycle. By any reasonable expectation, it should have vanished into silt long ago. Instead it lives on, playing both Homer and Cassandra, telling great tales of the past and warning of the future. Human beings are the greatest thing to happen to Ginkgo in about 90 million years.

Ginkgo trees can be found in Boston, south to Charleston, South Carolina, along the bank of the Detroit River, and west to the Pacific. Nineteenth-century horticulturalists planted Ginkgo in cities up and down the northeastern United States, because the trees tolerated coal soot so well. Today, urban planners put Ginkgo to work where automotive pollution, storms, and seasonal temperature swings expose human residents to some risk. Trees must be robust to survive Chicago. The Moscow of the Midwest shuts down virtually every year after a blizzard. Officials cordon off neighborhoods where wind knocked trees into power lines. In institutional memory, the city’s senior forester told me, no resident has ever called to say the storm toppled a Ginkgo.

One Ginkgo withstood the most violent weapon ever deployed. The U.S. Army unleashed the atomic bomb over Hiroshima shortly after 8 a.m. on August 6, 1945. More than eighty thousand people died instantaneously. Many thousands more died of radiation sickness within weeks, months, or years. Bamboo trees five miles from the epicenter ignited and burned. The explosion cleared all brush and herbs within a kilometer. No living thing grew back within 700 meters of the explosion.

Yards beyond that limit, the Hosenbou temple lay utterly in ruin. In the spring of 1946, something remarkable and unexpected happened. A tree in front of the temple sprouted from its roots, despite the destruction of its trunk. Long a cherished Japanese and religious symbol, Ginkgo biloba one morning became the ultimate symbol of renewal.

The mystery and defiance embedded in Ginkgo’s history reached its symbolic apogee that spring morning in 1946. It’s a tree that has taken more than 270 million years to prune—a longer history than any other living tree species. Ginkgo has many stories to tell. Beyond its historical and cultural significance, particularly after Hiroshima, Ginkgo is more than a living fossil. It is a living symbol of survival through extremes of conditions and time.

Ginkgo’s saga is a fairly straightforward evolutionary story, with a twist. It never died. It should have. It does what any good species is supposed to do. It shows up, then leaves fossil snapshots of a growing family, which just as soon trail off into extinction. Hundreds of species qualify as oaks. The top of the maple phylogenetic tree fans out into more than one hundred species. Ginkgo has just one living species, the sole survivor of a once-populous family. Most plant species live a few million years. More than 120 million years have passed without Ginkgo apparently changing a whit.

Ginkgo is an exception that proves a phylo-genetic rule of thumb. Closely related organ-isms tend to die out together when their ecosystems change. It makes sense. If nearly everyone living in a town works at the same factory, and the factory moves to another country, everyone loses their jobs. It’s the same in biology. If a bunch of related trees all thrive in the same ecosystem, and something happens to it, they are all doomed.

Yet Ginkgo has no living cousins. It’s really quite strange. The order Ginkgoales left behind fossils of six families, nineteen genera, and many different species. All are extinct except one. Ginkgo biloba is the only species in the genus Ginkgo, the family Ginkgoaceae, the order Ginkgoales, the class Ginkgoopside and the division Ginkgophyta, within the kingdom Plantae of the domain Eukarya.

No one has explained why Ginkgo is a survivor, though few have rigorously tried. Does it have some biochemical defense mechanism? Is it all those thick hydrocarbons in the leaves, keeping bad stuff away like a sealant? Geneticists are getting to the plant world, though only parts of the Ginkgo have been sequenced at this writing. And sequencing alone reveals nothing about the mysteries embedded in Ginkgo’s phenotype. “Is there whiz-bang chemical magic going on? The morphological stasis means something,” says Scott Wing, director of the Smithsonian Institution’s Paleobotany Division. “I just don’t know what it is.” He’s not alone. One factor undoubtedly is the tree’s ability to regenerate by sprouting from its base, as the Hosenbou Ginkgo did in the spring of 1946.

Sedimentary evidence suggests that Ginkgo thrives in “disturbed environments”—river-beds prone to flooding or land with rapid soil turnover. Usually, plants that thrive in such environs grow quickly, reproduce asexually (which Ginkgo can), and never grow big (which Ginkgo does). Ginkgo’s affection for disturbed environments explains the tree’s success in wooing nineteenth- and twentieth-century urban planners. Sidewalks are as disturbed as any environment. Ginkgo biloba became the urban sidewalk’s perimeter defense against pollution, heat, cold, disease, and insects. Ginkgo ascends columnlike from its block of soil in the pavement, so street managers needn’t worry about it growing over the sidewalk. The lowest branches of a maturing tree are high enough for the tallest pedestrian to clear, which saves time and money on pruning. It’s efficient. Ginkgo tolerates the salt scattered on icy roads. Predatory insects apparently have little or no appetite for Ginkgo. This natural insecticide led readers in some Eastern cultures, where Ginkgo is a native, to use its leaves as bookmarks.

As global warming heated up through the 1980s, 1990s, and the first decade of the twenty-first century, paleobotanists turned to Ginkgo for insight. Ginkgo’s leaves are not only exquisite, but they age well, and the stomata through which Ginkgo leaves inhale carbon dioxide are a key clue to our past, present, and possibly future climate.

Scientists have spent the last several years studying the relationship of Ginkgo stomata growth to atmospheric CO2. Sensitive instruments measure the level of CO2 with great precision. By counting the stomata on leaves grown under CO2 conditions known with great precision, researchers can develop a sense of the relationship between leaves and their carbon source. In the laboratory, they can also control the CO2 content, to see if leaves gain or lose stomata when the CO2 increases or decreases. Ginkgo is not the only subject of study. Research and experiments conducted on many plant species show that increased CO2 leads to either widening pores or growing fewer of them. Paleobotanists surmise past climate conditions from counting stomata.

When Ginkgo grows in an atmosphere high in carbon dioxide, it needs fewer stomata per square millimeter of leaf to satisfy its appetite. Similarly, when the CO2 content of the atmosphere is low, leaves produce more stomata—more workers to mine a scarcer resource.

Understanding how leaves react to varying CO2 is the first step. Next, researchers analyze Ginkgo fossils millions of years old, counting stomata under microscopes or on photographs of microscopic images. Stomata counting itself makes for a less-than-dramatic afternoon, but it has yielded some intriguing results.

A team of Chinese and British scientists compared Ginkgo biloba leaves collected in 1998 with others preserved since 1924 and with four fossils, the remains of extinct Ginkgo species. The scientists hoped to find a correlation between the number of stomata in a given leaf and the known CO2 content of the air. At the turn of the twenty-first century, the atmosphere contained about 380 parts per million (ppm) of carbon dioxide and is increasing by about 2 ppm a year. The study found that, since 1924, the number of stomata per square millimeter in Ginkgo leaves decreased by nearly 30 percent, to 97 from 134 stomata per square millimeter. Low counts on the Cretaceous and Jurassic fossil leaves corroborate other proxy geological evidence of high CO2 levels in those periods.

Researchers looked to fossils of four Ginkgo species, from the period from 58.5 to 53.4 million years ago, a virtually identical twin to modern Ginkgo biloba. They found the stomata must have grown in a greenhouse with CO2 values of 300–450 ppm, dates that bracket a major extinction event, the Paleocene-Eocene thermal maximum (PETM). The results are too low for CO2 to have single-handedly caused the PETM, one of earth’s five great extinctions (not including the current, human-induced sixth extinction). But that’s an easy problem to have. Many factors can contribute to a hothouse. A methane burst from the oceans may have triggered the PETM.

Other sets of stomata data reinforce the correlation between temperature and carbon dioxide that occurs throughout the geological record. Anthropogenic global warming is unique in that we know with certainty what is causing the additional carbon contribution to the atmosphere—industrial combustion and deforestation—and therefore its effect on temperature. The correlations scientists observe today through precision sensing are complemented with indirect evidence—proxies—of temperature and carbon dioxide from the past. Oxygen isotopes ratios indicate past temperatures, as reflected in certain marine fossils. Stomata indices in fossilized leaves of extinct plants, and Ginkgo, suggest the carbon dioxide content of past greenhouses.

Today, Ginkgo is on the move again, anticipating a unique episode in its millions of encounters with climate change. Between 1953 and 2000, Ginkgo’s growing season changed in Japan, beginning four days earlier in the spring and ending eight days later in the fall. Ginkgo knows the world is warming again. ❧