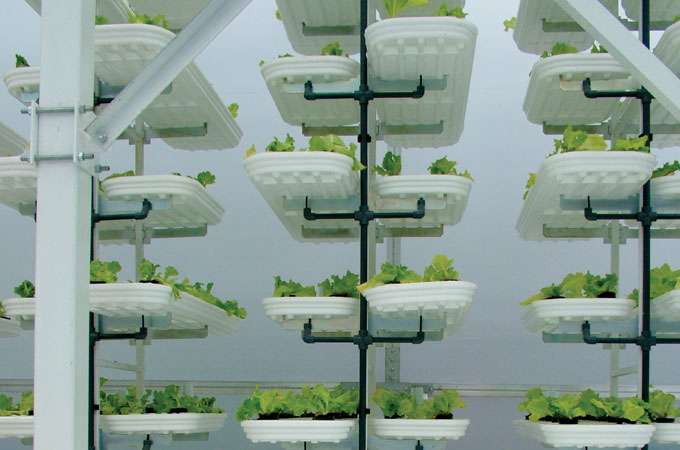 Up on the Farm

Vertical farming has generated plenty of buzz as a way for cities to eat sustainably, but little practical progress has been made—until now. Valcent Products Inc. has developed a vertical farming system for commercial use and is testing it on some tough customers: primates and other animals in the U.K.’s Paignton Zoo.

Dubbed “VertiCrop” and positioned in the center of the zoo, the system raises those 11,000 heads of lettuce in less than four weeks. Stacked three meters high in racks, the crops rotate on a conveyer belt while bathing in a precise combination of water, air, sunlight, heat, and nutrients. The crops don’t need pesticides—or even soil—and use 90 percent less water than field crops do.

For the zoo and its denizens, this means cheaper costs and a better diet. The system can grow a variety of crops, allowing the animals to eat herbs, vines, and seeds that pack a nutritional wallop but normally cost more than the zoo can afford.

Valcent sees the zoo test as a step toward larger vertical farms that could revolutionize agriculture. Managing director Chris Bradford says the company’s next models could fit into a warehouse, use artificial light and—hopefully—run on renewable energy. He says the company’s technology has already caught the attention of investors in the water-starved Middle East and in high-density areas such as Singapore. ❧
—Jessica Leber