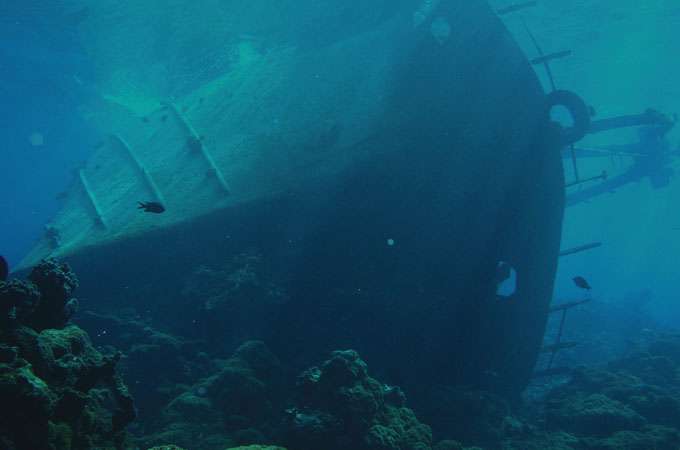 Around 1991, the long-line fishing vessel Hui Feng No. 1 mysteriously foundered on Palmyra Atoll, a group of Pacific islets fringed with spectacularly lush coral reefs. While little is known about the crash itself—the wreck was never reported to authorities and appears to have been simply abandoned—scientists are piecing together a picture of how its aftermath threatens to decimate the atoll’s pristine reefs.In 2004, a marine biologist exploring the wreck noticed a few unexpected residents in the area. They were Rhodactis howesii, coral-like organisms that, by growing in monocultures, occasionally cover sections of a reef, blotting out the other marine life.

A year later, more of the organisms appeared, and by September 2007, R. howesii had spread over roughly one square kilometer of reef surrounding the ship—the biggest corallimorph invasion on record.

Scientists are nearly certain that the wreck and the invader are linked—the invasion radiates from the ship, with the number of R. howesii decreasing with distance—but they are still trying to piece together exactly how. Thierry Work, a USGS wildlife disease specialist monitoring the wreck, and his colleagues suspect a few R. howesii were living humbly on Palmyra well before the long-liner came crashing in. Iron leaching from the wreck might have sparked the corallimorph bloom. Now Work fears the invasion may be self-perpetuating. Corallimorphs can reproduce asexually; every storm washing through the reef fragments the organisms, creating new ones that continue the spread.

Work hopes money can be found to remove the iron-spewing wreck, but after that not much can be done to stem the corallimorph takeover. Meanwhile, the wreck of the Hui Feng No. 1 serves as a warning that abandoned ships and other man-made debris may pose a greater danger to reefs than previously suspected and should be removed as soon as possible. ❧
—Rebecca Kessler