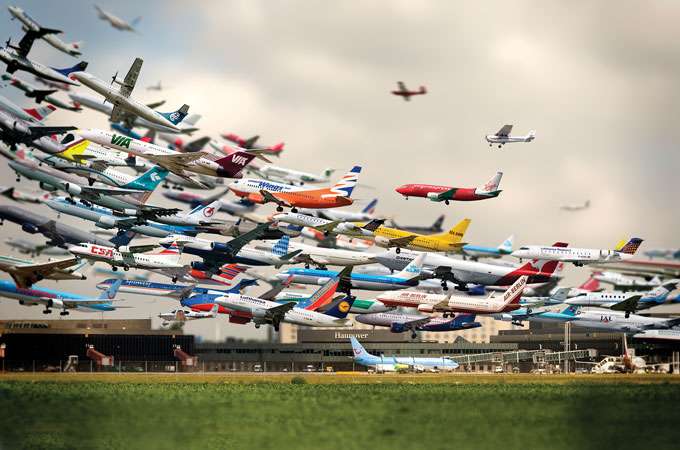 A Flock of Jets

Both Boeing and Airbus have trumpeted the efficiency of their newest aircraft, the 787 and A350, respectively. Their clever designs certainly make a difference. But a group of researchers at Stanford University, led by Ilan Kroo, has suggested that airlines could take a more naturalistic approach to cutting jet-fuel use. The answer, says Kroo, lies with birds.

Scientists have long known that birds flying in formation expend less energy. The air flowing over a bird’s wings curls upward behind the wingtips, a phenomenon known as upwash. Other birds flying in the upwash experience reduced drag and thus spend less energy propelling themselves. Aeronautics expert Peter Lissaman has suggested that a formation of 25 birds might enjoy a range increase of 71 percent.

The principles are not substantially different when applied to aircraft. Kroo and his team modeled what would happen if three passenger jets departing from Los Angeles, San Francisco, and Las Vegas were to rendezvous over Utah, assume an inverted V-formation, occasionally swap places so all could have a turn in the most-favorable positions, and proceed to London. They found that the aircraft consumed as much as 15 percent less fuel, with a concomitant reduction in CO2 output. Nitrogen-oxide emissions during the cruising portions of the flight fell by around 25 percent.

There are, of course, kinks to be worked out. One consideration is safety—would passengers feel comfortable traveling in convoy? Kroo points out that the aircraft could be separated by several nautical miles. A passenger peering out the window might not even see the other planes. Whether the separation distances involved would satisfy air traffic–control regulations is another matter.

It remains to be seen how weather conditions affect the airflows that make formation flight more efficient. In zones of increased turbulence, the planes’ wakes will decay more quickly, and the effect will diminish. Kroo says this is one of the areas his team will investigate further. It might also be difficult for airlines to coordinate the departure times and destinations of passenger aircraft in order to benefit from formation flight. In contrast, cargo aircraft and routine military flights might be easier to reschedule.