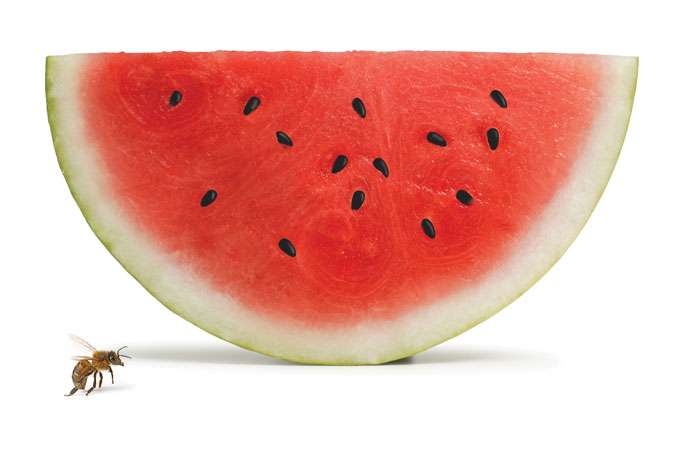 Pollinators are pricey. In California’s central valley—where the local crisis is very real—the cost of renting bee hives during the almond bloom recently tripled within two years: $50 per hive in 2006, $100 per hive in 2007, and $150 in 2008. As the numbers ratchet up, farmers may start looking for a backup plan.

Several studies show that wild pollinators can pick up the slack: watermelon flowers in California can receive visits from more than 30 native species of bees, and some wild pollinators can spur the commercial honeybees on—making them five times more efficient. (Researchers think the confused native pollinators try to mate with honeybees, rousting them from a flower where they might otherwise dawdle.) But wild bees can help only if they have habitat close enough to the fields.

There have been a couple of dozen studies of wild bees volunteering on farms. In 2008, a group of scientists synthesized these findings to see whether they could draw some general conclusions about how far pollinators were willing to commute. (1) As expected, the farther the farms were from wild habitat, the fewer bees researchers found—on average, 50 percent fewer just one mile from habitat. Some species go more than twice that far, but it looks as though one mile may be a rough rule of thumb for estimating the radius of a bee’s foraging area.

Researchers found only weak evidence that lack of bee diversity hurt agricultural production, a finding which may be explained by the use of commercial hives, but farmers are taking note nonetheless. Even those who remain unpersuaded that native bees will help them are often willing to plant bee-friendly plants in hedgerows and windbreaks—just in case. ❧