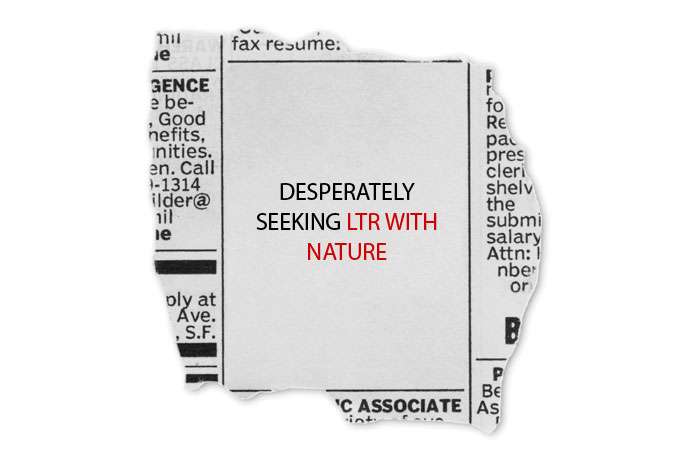 Frank, my husband, is a self-described “hard” scientist. He studies chemicals in the brain—how desire actually works in the cells, the little switches and locks. He listens to me talk about what it means to love a place, but he says I can’t just assume that people care about places. He says I need data. “I’m a philosopher,” I told him. “Philosophers don’t do data.” But the fact is, I had been conducting a study of sorts. For several months before we left for the island, I read the love ads in the Saturday paper. The secret coded yearning, the SWFs and DMs all ISO something—this interested me. I would never have had the occasion or even the temptation to phone the Lonesome Horseman, or send a photo to Teddy Bear, or tell Endangered Species that I’m a rarity myself, but I was curious. Love ads are a data bank of human nature far more revealing than the Human Genome Project: fifty people every week explaining who they are and what they are looking for, in twenty-five words or less.

I kept a count of love ads in the Corvallis Gazette-Times, tallying up what people were searching for. The data revealed that more people like “the outdoors” than any other thing. The typical SF, a LARGE & BEAUTIFUL momma, 31, who is shy and honest, likes the outdoors, movies, and walking on the beach (in that order). The typical SM is a VERY FIT MALE, who is very sensitive. He likes the outdoors, romance, and tattoos (again, in that order). In all, fully two-thirds of the SFs and SMs listed “the outdoors” first on their lists—a clear winner.

After the outdoors, the first runner-up was watching movies. Beaches and camping tied for third place. Walks and hikes came in fourth. Then came dancing and dinner, followed by romance. (Let us pause to notice how long it has taken to get to romance—sixth on the list, after all the outdoor sports). After romance, there was a three-way tie among cuddling, fishing, and country-western music (although none of the people who liked to cuddle also liked to fish), and one vote each for mountains, darkness, the blues, Harleys, hand-holding, friendship, and vampires. My research found no significant difference between men and women, except that three women liked sports, which are of no interest whatsoever to the men. So there it is. People like the outdoors best of all, they say, even better than sex.

Frank received these data with the mixed astonishment and chagrin that only a scientist can muster. “Kathy, this is bad science.” I know that; but that doesn’t mean it isn’t important. I don’t want to claim that everybody loves the outdoors; I just want to point out that many people do, and to observe that love for place and love for people are mixed together in beautiful and mysterious ways. I know a woman who walked through an ancient cedar forest and fell helplessly in love—with the forest and with the man carrying her sandwich. And I have seen people search all their lives for what would make them happy and whole and never think to look outside the door—perpetual seekers, not sure what they are looking for, but endlessly searching, on the Internet, in catalogs, at the mall.

I don’t know if the people who place love ads in my hometown newspaper are typical of people in general. For that matter, I don’t know if Oregonians are representative of human beings. And who knows if the people are telling the truth; maybe they just say they like the outdoors because they think that will attract a particular sort of person. I’m not claiming that the connection between loving a person and loving a place is simple. I just think it’s significant that—more often than not—when people have an opportunity to envision their unlived lives, to dream about starting over and doing it right this time, the outdoors is the setting for their dreams. Big-hearted Bob and Chantilly Lace walking hand-in-hand at the edge of the sea: the raised pulse, the rhythmic waves, the crying gulls, the salty, exultant wind.

In 1984, Harvard entomologist E.O. Wilson advanced the biophilia hypothesis, arguing that human beings have an innate attraction to living things. This attraction makes sense from an evolutionary perspective. “To an extent still undervalued in philosophy and religion,” he wrote, “our existence depends on this propensity, our spirit is woven from it, hope rises on its currents.” I like this hypothesis. It explains a lot: When we wall ourselves off from the natural world’s wild sources of comfort and belonging, don’t we feel a self-destructive restlessness, like a single moth in a jar? And Wilson’s hypothesis is hopeful: If humans naturally love the living things on this planet—all the burrowing, breathing, breeding biotic systems, the foundations of our very lives—then maybe we can find a way to act lovingly toward them.

This is why I was happy to present Frank with evidence consistent with the biophilia hypothesis and to suggest one more thing. We are attracted to the great green earth—and to pink algae, blue fish, gasping newborn babies, and suction-cup tadpoles. But read the love ads closely and literally: ISO LTR. In search of a long-term relationship. The people who place ads in my hometown newspaper aren’t just advertising for partners, they are advertising for love. Like all of us, what they seek is a lasting relationship—with people and the planet—and what they cherish is relatedness, being in caring connection with a person or place. We are creatures who are born to love. It’s more than biophilia that drives us. It’s philophilia—the love of love itself. ❧