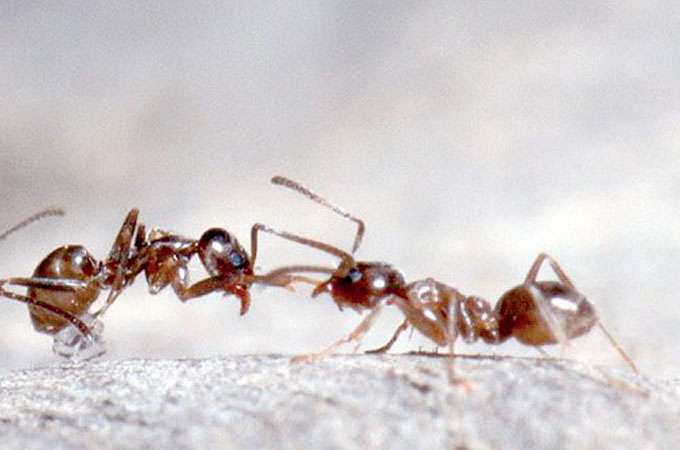 Argentine ants are masters of destruction. They displace native ants, raid honeybee hives, drive pollinators away from flowers, and pour into people’s homes around the globe. In fact, one enormous colony extends for thousands of kilometers along the southern coast of Europe. To stop these relentless invaders, Neil Tsutsui at the University of California, Berkeley, and his colleagues have come up with a devious solution: stir civil war within the colonies.

By applying certain chemicals to an ant, the researchers have found, they can provoke its nest mates into attacking it. All Argentine ants (Linepithema humile) in a colony have on their bodies a distinctive mixture of molecules called hydrocarbons that allows them to recognize other colony members. To create the enemy cocktail, Tsutsui’s team identified hydrocarbons that differed among colonies.

Chemists at the University of California, Irvine, synthesized the molecules, which were then used to coat individual ants. The coating adds a scent that makes an ant’s nest mates think it comes from a different colony, thus changing it from “friend” to “foe.”

In an entomological version of Rome’s Colosseum, researchers placed each coated ant into a Petri-dish “arena,” added ten nest mates, and watched. The nest mates lunged, flared their mandibles, pulled the ant’s legs and antennae, smeared toxic chemicals on its body, and sometimes even killed it, says Tsutsui. While nest mates showed aggression during roughly five percent of control trials, those levels rose to an average of 35–65 percent with treated ants.

While more research is needed to determine whether the chemicals will work in the field, Tsutsui hopes they might someday be used as an environmentally friendly alternative to insecticides. ❧
—Roberta Kwok