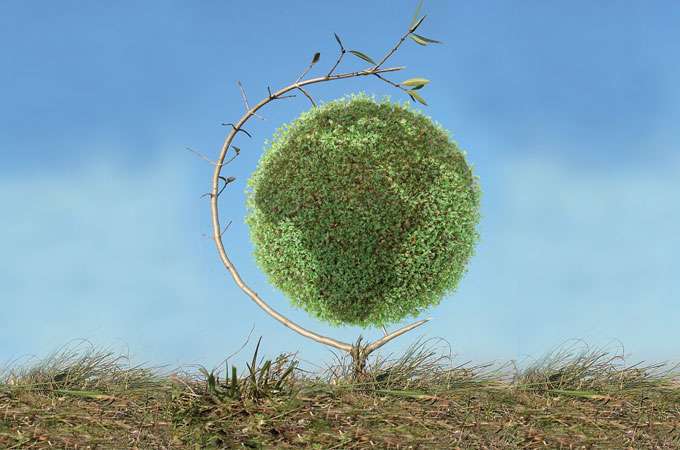 Carbon-offsetting schemes often focus on planting new forests as a means of lowering atmospheric CO2. Most climate models have suggested that this strategy will be most effective in the tropics, where forests are more productive and can therefore store more carbon. But a new study in the journal Global and Planetary Change says those models might be wrong, or at least misleading. In fact, says Alvaro Montenegro of St. Francis Xavier University in Nova Scotia, forest planting would have the greatest cooling benefit not in the tropics but in mid-latitude regions—including much of Europe and North America.

The problem with the earlier models, Montenegro says, is that they didn’t correctly account for a critical factor called albedo, which measures how the earth’s surface reflects solar radiation. Albedo depends on land cover; cropland, for instance, is “brighter” in color than forests and therefore reflects more radiation, producing a cooling effect. In turn, many models have suggested that, if forests were to replace croplands and grasslands at higher latitudes, it could create an undesirable net-warming effect. The reason? The new, darker forests would soak up enough heat to offset—or even reverse—the cooling benefit provided by increased CO2 absorption.

Montenegro and his colleagues suggest that past studies have overestimated the albedo-related warming that might occur due to mid-latitude reforestation—in part by projecting forest cover where no forests could actually grow. Rather than merely simulating the effects of forest cover spreading over broad regions, Montenegro’s team used high-resolution satellite data to examine land-cover effects on a finer scale. They focused only on agricultural lands having potential to support forest cover and that presumably would be forested in the absence of human activity. For these areas, they calculated changes in CO2 storage and albedo that would be expected if each 25-square-kilometer pixel of cropland were converted to forest.

Despite considerable regional variability, the researchers found that many of the areas with the most-favorable net balance between CO2 uptake and albedo are at temperate latitudes. The study finds that forest planting, where viable, will always result in cooling at latitudes ranging from 40 degrees south to 60 degrees north—an area that extends far beyond the tropics and includes broad swaths of Australia and Canada.❧
—Scott Norris