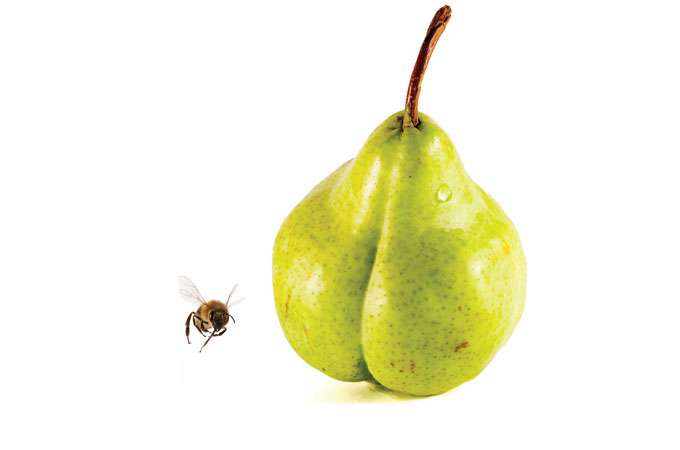 Researchers may be overlooking an insidious pollinator crisis—one that has little to do with bees and everything to do with booming markets for raspberries, pears, and chocolate.

Beekeeper Eric Olson has lost so many bees in the past few years, he’s had to consider closing shop. But nothing prepared him for what he found when he went out early one November morning to do a final check on “his girls,” as he calls them. The first hive was dead—completely empty. So was the second one. And the third. He began to wander through the yard, lifting lids at random, “just to see how drastic it was,” he says. “It was such a shock, I had to find out if we had anything left.” He had lost 90 percent of these bees, which had been buffeting blueberry flowers in western Washington a few months earlier. “What the heck happened that in one month those beehives went from sky-high, jam-packed, full of bees, doing great—to dead?”

You may already know about the global pollinator crisis. Over the past 50 years, the number of domestic honeybee colonies in the U.S. has dropped by more than half. Olson watched the number of beekeepers in Washington fall from around 45 to only eight today. At the same time, wild pollinators have been disappearing. No one has seen a Franklin bumblebee (native to Oregon and California) since 2006 or a rusty-patched bumblebee (once common in New York) since 2005. As if this were not enough, beekeepers began telling stories about something utterly strange: sterile worker bees were abandoning hives, leaving their queens and pupae behind to die. In 2006, researchers began calling this phenomenon colony collapse disorder and pegging it as the source of a global pollinator crisis. The media picked up the story, and it quickly embedded itself in the public consciousness—and in the scientific community.

It’s a truly cautionary tale. Instead of a crisis that impacts humanity directly, such as a tidal wave or a pandemic, this one hits us as collateral damage through our ecological partners. As such, it’s tempting to use this crisis as an object lesson: we mess up the environment, pollinators suffer, harvests fail—and in the end, the cascade triggered by humanity rolls back on us in the form of hunger. Perhaps this circular justice was too poetic to resist; perhaps stories from beekeepers such as Olson were a little too compelling—because in all the excitement, few researchers stopped to question whether the bee crisis was a genuine global trend. 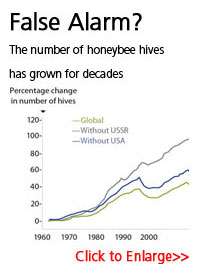 Then, last year, Argentine scientist Marcelo Aizen hit upon an elegant way to test that assumption. If there really were a crisis, he figured, harvests from crops that depend on bees and other pollinators should be declining or at least leveling out. Yet the yields of pollinator-dependent crops have grown at about the same rate as those of wind-pollinated crops. With Lawrence Harder, Aizen went on to show that instead of crashing, the total number of commercial honeybees has increased 45 percent in the past 50 years.

It’s not that the dire stories were false; they just didn’t represent the big picture. Call it a scoping problem—the conclusions you draw from looking through a microscope may be opposite to those you arrive at after examining the same evidence through a telescope. By drawing on both perspectives, scientists have come to a new, more-nuanced revelation: a pollinator crisis does indeed loom, but the crisis they see has little to do with a decline in bees and everything to do with economic globalization and the world’s growing appetite for raspberries, cashews, chocolate, and other luxury crops. You don’t have to don a protective suit and poke around beehives to see this crisis: it’s there in your local supermarket when you find watermelons for sale in December.

The first person to point out the scoping problem was Jaboury Ghazoul. Ghazoul is an ecologist with enough sense of whimsy to poke fun at himself: his curriculum vitae webpage shows a picture of him looking beleaguered, with a crying infant straining from his backpack. “Jaboury Ghazoul,” the caption reads, “. . .he has a hard time with his children.” Perhaps it was this willingness to acknowledge human foibles that allowed Ghazoul to stand against the incoming tide of orthodoxy. The examples of pollinator declines were absolutely accurate and troubling to Ghazoul. But he was also troubled by the fact that scientists were using these zoomed-in, microscope-type observations to make generalizations about the big picture.

In 2005 he wrote an opinion piece in Trends in Ecology and Evolution, pointing out that, while many pollinators had decreased, others had surged to take their place. (1) Furthermore, he wrote, most of our staple crops—rice, corn, wheat, soy—don’t rely on pollinators. Despite all the talk, there was no evidence that crop productivity was going down.
Ghazoul’s purpose was not to defend big agriculture but to protect the credibility of conservationists. Big-picture claims should be evaluated using big-picture data, he wrote, “lest we overplay our hand in demanding conservation action for the wrong reasons.”

The paper was incendiary. “There are still some people who practically don’t speak to me anymore,” Ghazoul said. A group of scientists shot back a heated critique of this opinion piece, citing still more pollinator declines—along with historical examples of crop decrease due to loss of pollinators and studies showing that crops closer to wild habitat were more productive than plants in the middle of the field.

Still, there was no big-picture analysis to show whether the declines were actually translating into crop losses. To prove this—or to prove, as Ghazoul suspected, that crop yields were doing just fine—scientists would need to assemble information on every farmer’s harvest worldwide. They’d need to find a vast store of data.

That trove of data, it turned out, was hidden in plain sight. The United Nations Food and Agriculture Organization has kept statistics on global crop productivity for years. “When we came across these data sets, I said, well this is what we needed,” Aizen notes. “Here is the data, which is publicly available, to test this.” In his analysis of the FAO numbers, he notes that, if there really were a global pollinator crisis threatening food supplies, there should be a related decline in average yield for all crops—or, at least, relatively lower yields for pollinator-dependent crops. (2)

But when Aizen and his coauthors plotted out the productivity gains of plants that need bees alongside those of wind- and self-pollinated plants, they got two lines trending upward in tandem. Chocolate depends on pollinators, and yields from cocoa farms have doubled since 1961. Watermelon, another plant that needs bees, has seen yields increase by 158 percent in the developed world and 161 percent in the developing world. This means that, on average, each watermelon patch is producing more each year than it had the season before. These are not numbers that would indicate a crisis. 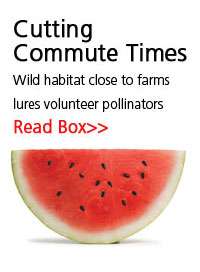 Working with Lawrence Harder, Aizen then turned the telescope provided by the FAO numbers toward honeybees. (The organization tracks the number of commercial hives around the world.) They found that, although the number of hives in the U.S. had indeed dropped precipitously, the global population of managed honeybee hives had increased by 45 percent in the previous 50 years, and total honey production had increased more than 100 percent since 1961. (3) In other words, the bee business has been outsourced. Since the 1960s, U.S. honey producers have been forced out of the industry by cheaper, imported honey. U.S. bee losses have been dwarfed by increases in places such as China, Argentina, and Turkey—countries which now dominate the honey supply. “At least for honeybees,” Aizen said, “the pollinator crisis is not happening.”

But that doesn’t mean there’s not a crisis. Aizen and Harder could have stopped with their repudiation of conventional wisdom, but instead they took their analysis a step further. What they found was sobering.

Over the past half-century, the earth’s farmers have doubled their production of major crops that don’t need pollinators. These plants—corn, wheat, potatoes—are staples, and their increase reflects the basic need to fill 3 billion more bellies (the doubling in production roughly mirrors a doubling in population). In that same time period, however, production of pollinator-dependent crops (cardamom, cantaloupes, and cashews) has quadrupled—and the number of beehives has increased. But Aizen and Harder point out that the 45-percent increase in honeybees seems less impressive beside a 400-percent increase in flowering crops.

The fact that yields have increased despite the disparity between bees and flowers could indicate that wild pollinators are supporting farmers. But Aizen and Harder warn that, as more land is devoted to luxury crops and as small, diverse fields are converted to vast, high-tech monocultures, farmers could wipe out native bees—effectively knocking down the prop holding them up. Furthermore, if farmers in Africa turn to the likes of Eric Olson to ship in domestic honeybees, it could compound the problem. “Don’t forget,” Harder told me, “honeybees are an invasive species in most places.” They don’t always contribute to the relationships that have evolved between local species over the eons. They take pollen from native plants but often don’t fertilize them as well as the local bees. This means fewer seeds, fewer native flowers, and fewer wild pollinators.

In the process of demonstrating that no global pollinator crisis was occurring, Aizen and Harder found the portents of, well, a global pollination crisis. However, the crisis they foresee is one driven not by mysterious die-offs but by market pressures plainly visible in the produce aisle. It has to do with people in poor nations developing an appetite for good cocoa and coffee. It has to do with people in wealthy countries assuming that tomatoes will be ripe and readily available year-round. Bee scarcity, in other words, is an economic problem caused by economic forces.

So how does this economic explanation square with the clear and present biological crisis that Eric Olson faces on the ground in Yakima, Washington? “We are not denying that there are serious biological problems, like in the U.S. with colony collapse disorder, et cetera,” Harder said. “But our argument is that this sort of thing is a short-term episode in a much-longer declining trend that’s probably more related to the economics of the honey industry.”

The very fact that it’s so difficult to wrap your mind around the idea that dying bees could be a symptom of something as abstract as global economics speaks to the essence of the scoping problem: good science takes that which seems obvious to the naked eye and—by looking at it from a new perspective—provides a new and often counterintuitive model for explaining things. It seems obvious, for example, that the sun travels around the earth until you spend some time looking through a telescope. ❧

Nathanael Johnson is a freelance writer who contributes to several media outlets, including Harper’s Magazine and public radio. He frequently writes about agriculture, health, and conservation. He lives in San Francisco, California.