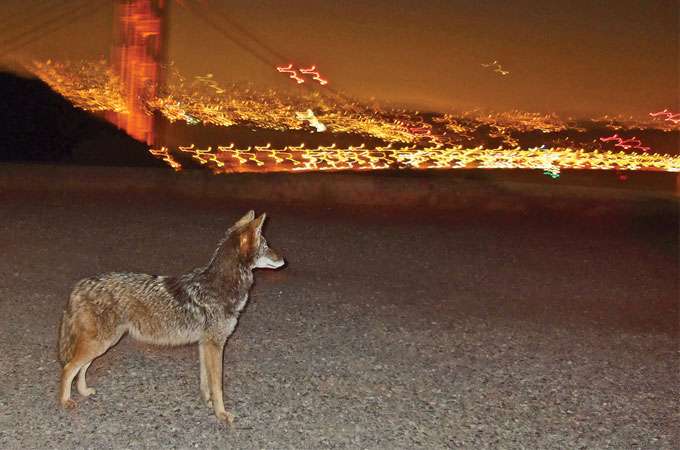 Walk on the Wild Side

Are urban coyote populations rising because the creatures are attracted to human activities or in spite of those activities? This question has vexed researchers for years, and now Stanley Gehrt of Ohio State University is piecing together an answer.

In the Journal of Mammalogy, Gehrt and his colleagues chronicle their research on coyotes in the Chicago metropolitan area, where more than 9 million people are spread across six counties. Despite this density, urban coyote populations are on the rise, and researchers estimate that several hundred to a couple of thousand coyotes live in greater Chicago.

To get a sense of where the coyotes live and why some of them run into trouble with people, Gehrt’s team placed high-frequency radio collars on 181 coyotes, then tracked them as they navigated the urban morass. The researchers found that coyotes’ territory is usually oriented around a patchwork of habitat spread across public parks and private lands. This allows the majority of the animals to avoid contact with humans. Still, eight percent of the resident coyotes live purely urban lives in territory that includes industrial parks and has “no measurable patches of natural land use within them,” the researchers write.

Despite their proximity to humans—and their reputation for mischief—the coyotes cause little trouble. Gehrt’s team found that the animals take pains to avoid people, in part by shifting their activities to nighttime. There also is scant evidence that coyotes are incorporating human food into their diets, suggesting the animals don’t seek out urban settings to scavenge for easy meals.

But there were a few bad apples. Seven of the coyotes generated complaints from the public after being sighted near houses (two of them built dens under people’s decks). Gehrt and his colleagues say this goes against coyotes’ natural tendency—the troublesome animals were either sick (four of them had mange) or being deliberately fed by humans. ❧
—Justin Matlick