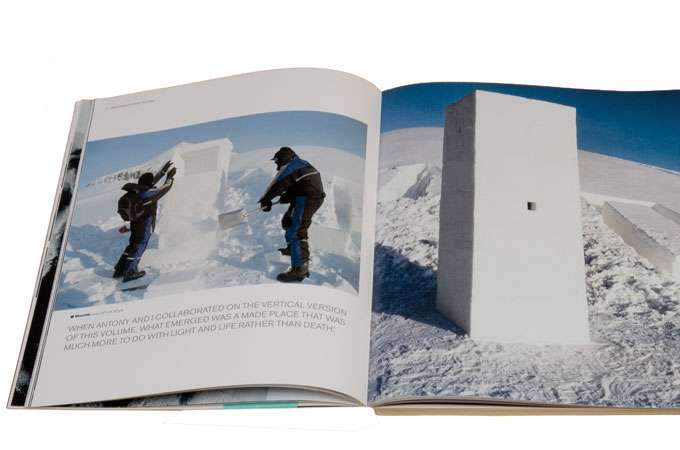 Climate change, perhaps the most far-reaching and significant issue of this century, is no stranger to the bestseller list, the red carpet, the floor of the Senate, or the corporate agenda. But another realm has also been involved in the dialogue—contemporary art.

The book Burning Ice: Art and Climate Change compiles the largely somber work and journal entries from the Cape Farewell expeditions. These expeditions are the brainchild of artist David Buckland. Buckland, along with other artists, scientists, a poet, and a writer, sails aboard the 100-year-old schooner Noorderlicht to Svalbard—an archipelago midway between Norway and the North Pole. This peculiarly warm-watered yet northern site allows them access to an extreme arctic landscape. There is no particular research question fueling their expeditions—just the idea that a group of artists should be among those who experience and witness the changing arctic landscape. The artists are not required to produce work, and there are no funding-agency reports—just an expectation that the artists may have some insights in representing climate change. Can these people show us again what we know we know?

Can they offer anything when we are focused on alternative energy, CO2 trading quotas, and glacial retreat? Why not just leave it to trusted scientists? Artists don’t give answers; they don’t operate within a structure of credentials reinforced by formal peer review. They explore nuance and subjective experience and accept multiple answers to the same question. And that’s precisely the point.

Artists reflect a relationship with nature that is often obscured and muddied by our urban existence. We “know” about climate change, but there has been no en masse abandonment of cars, no mass migration to dense urban centers to shrink our carbon footprint, no sudden antishopping spree—in fact, no significant lifestyle changes. A fundamental conceit of the Enlightenment is the conviction that knowledge leads to action. And it is the artists who are producing the post-Enlightenment strategies.

The artist’s view is invaluable precisely because artists are not experts and do not have the authority granted by science. They are only as persuasive as their images. As nonexperts—though interested and knowledgeable—they stand in for the view of Everyman. They transcend boundaries; they transcend disciplines, issues, and expertise. With art, the viewer knows that she has a license to interpret and critically evaluate the work and that her opinion matters. The same can’t be said of science. Scientific arguments are presented in the public imagination as faits accomplis. When definitive terms such as “discovered” and “understood” are the norm, science is often a one-way conversation.

Although Burning Ice does not survey the wide range of contemporary artwork on climate change, it does play into the public imagination differently than the computational model, the quantitative risk analysis, or other summative representations used by environmental agencies to inform public decision-making. The art invites interpretation without oversimplification or unnecessary precision. And by combining legibility (“I don’t know much about art but I know what I like”) with a diverse viewership, works of art provide the opportunity for evidence-driven discussion. They invite skepticism (who trusts an artist?) and critical engagement (“a child could do that”). They incite participation, not passive consumption of facts. In a participatory democracy, strategies that raise the standards of evidence used in public debate and that engage diverse publics are worth attention. And as much as climate change is a phenomenon of the environmental commons—we are all subject to it, layperson or expert—it necessitates, and deserves, a response from the commons. ❧