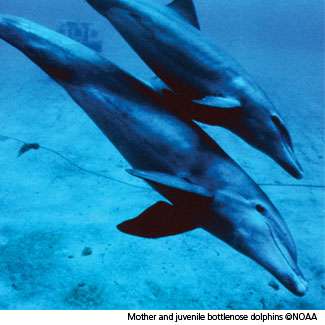 Hurricane Katrina struck the Gulf Coast in August 2005, wiping out commercial fishing boats and reducing recreational fishing. A new study has revealed that, while the storm was disastrous for Louisiana, its fallout may have encouraged more dolphins to reproduce.

In the years since the storm struck, researchers have speculated that the ensuing downturn in fishing might have paved the way for Atlantic bottlenose dolphins (Tursiops truncatus) to take advantage of increased fish populations. And dolphin calves may have died during the storm, causing female dolphins to become fertile the following season.

To investigate these questions, a research team monitored Atlantic bottlenose dolphins in the Mississippi Sound for three years, scanning each encountered group for calves. The average number of calves seen per kilometer traveled by the team more than quad-rupled between the summers of 2005 and 2007, according to the study in Marine Mammal Science. While the proportion of calves to other dolphins was around one percent immediately before Katrina, it went up to about seven percent by spring 2007.

The fishing reprieve may have given female dolphins more food to feast on, boosting their chances of successful reproduction, the authors say. And since dolphins can expend energy avoiding boats, the dip in recreational fishing might have allowed the animals to focus on hunting prey instead. ❧