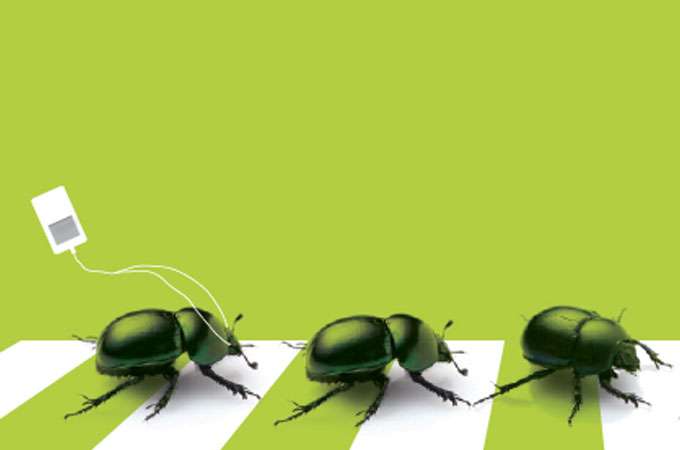 One sticky afternoon last summer, Richard Hofstetter, a beetle expert at Northern Arizona University, picked his way through yellow-green grass on the slopes of Humphreys Peak. Looking up the mountain, he could see the skeletal frames of dead trees amid evergreen forest. The ground was a mess of lifeless branches—about half the conifers were dead or dying.

Entering a stand, Hofstetter cut a neat rectangle into a fallen tree and peeled back the bark. Spruce ips, a species of bark beetle, had carved a delta of channels into the underside to feed off the tree’s sap. When enough beetles take up residence, the host tree is overwhelmed and dies. Due to recent droughts, which weaken the trees, and mild winters, which bark beetles prefer, western forests covering an area the size of Maine are under invasion. In the worst-hit regions, such as Colorado and British Columbia, entire forests could be reduced to grassland—victims of the largest insect infestations ever to strike North America.

Hofstetter and his colleagues believe they may have found a way to halt this plague: by driving the insects crazy. For years, entomologists have studied the chemicals released by beetles for mating and communicating, hoping that they could be manipulated as a deterrent or used for control. This approach has had limited success. But in early 2005, Hofstetter met Reagan McGuire, a former truck driver and pool hustler who had quit his job and enrolled at NAU.

McGuire had been thinking a lot about the bark-beetle epidemic, and he came up with a novel idea: perhaps a military crowd-control device he had read about, which emits powerful pulses of sound, could be used to kill the insects. Most scientists would have politely ushered him away, and Hofstetter admits he was hesitant. But McGuire convinced the entomologist that the idea might have merit, and the two started to collaborate.

The military technology, it turned out, didn’t have much practical application. But a little Googling on the subject of beetles and acoustics led the two to David Dunn, an avant-garde composer and collector of animal sounds. Dunn had inserted microphones into the pinyon pines surrounding his home in Santa Fe and recorded a CD of the noises they captured. Amid the gurgling of pine sap and slow flexing of the trees can be heard a stream of chirps: the calls of pinyon engraver beetles. The recording marked a turning point for Hofstetter. He and his colleagues had been so focused on finding a chemical deterrent that they hadn’t given much thought to exploiting the beetles’ acoustic abilities. Yet Dunn had captured what sounded like a complex communication system. Somewhere in that entomological language, Hofstetter realized, there might be signals that could disrupt the beetles’ behavior.

McGuire began his search for a sonic weapon by bombarding the bugs with Guns N’ Roses songs and Rush Limbaugh shows in his laboratory. He later got better results using the aggression calls made by the male insects (recorded with Dunn’s help) together with artificial squawks and bleeps of the same frequency.

The effect on the beetles is extraordinary—Hofstetter once witnessed a pair mating and then, after the sound was switched on, watched as the male ate the female.

In one experiment, the team placed a beetle on a thin slice of pine sandwiched between two clear panes of Plexiglas. The sound prompted the distraught insect to try to escape by tunneling through the Plexiglas. “We drove him crazy,” McGuire recalls with a grin.

The team plans to try out a version of this technology in the spring. Dunn has been testing a car-stereo speaker that can produce the high-frequency sounds that beetles hear. He screwed the speaker into a pinyon pine and listened as the output reverberated up and down the trunk. The team believes the device can be used to pump McGuire’s sonic deterrent into vulnerable trees. Fitting every tree in a forest with a speaker would, of course, be impossible. But if the sounds prove disturbing enough to drive beetles out of the trees or to deter new arrivals from burrowing into the bark, a ribbon of trees equipped with these cheap devices could form a kind of acoustic firebreak. Enough, perhaps, to protect some of the many millions of acres of still-healthy forests from the advancing beetle armies. ❧