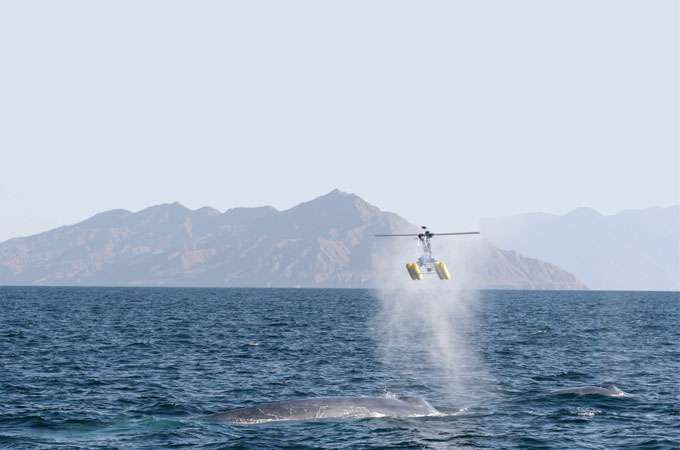 Imagine trying to give a breathalyzer test to a humpback whale. That’s the challenge that Karina Acevedo-Whitehouse faced when she set out to gather key information about whale disease.

But a whale’s breath contains many of the same bacteria as its tissue, so Acevedo-Whitehouse decided to try to capture the moisture-laden air that whales fire through their blowholes. She started with easy targets: gray whales and other species that swim close to boats. To snag the whale’s breath, the scientists attached Petri dishes to an eight-foot pole and held it over the animals’ heads.

Blue whales and other species that keep their distance from boats posed a bigger challenge—until Acevedo-Whitehouse enlisted a professional pilot to guide a remote-control plane. The plane carried Petri dishes over the whales, and the pilot’s steady hand allowed the team to capture breath samples without losing a single plane into the sea.

Back at the lab, Acevedo-Whitehouse’s team screened the samples for pathogens. Haemophilius, the bacterial strain showing up most frequently, can lead to meningitis and pneumonia. The researchers also found the bacterium beta haemolytic streptococci, known to cause disease and linked to incidents where sea mammals become beached or stranded in shallow water.

Acevedo-Whitehouse believes her research could help scientists’ quest to better understand whales. Whether it would ever lead to treating whale disease is another matter. The issue is controversial—some wildlife experts believe animal populations should be left to their own devices, even when their health is at risk. ❧