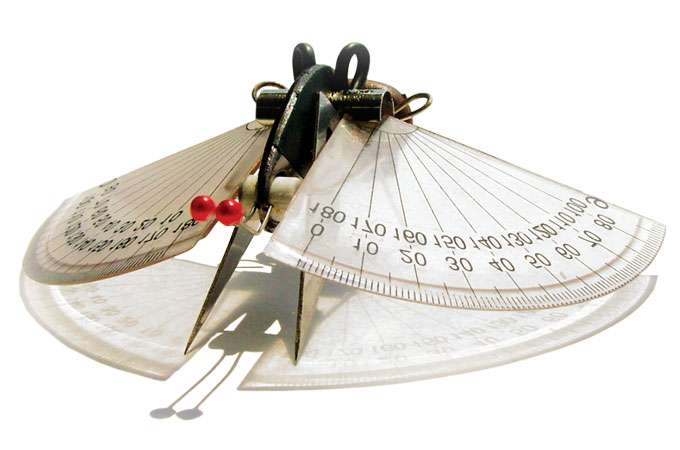 Building On The Fly

In the heart of Africa’s savanna lies a city that is a model of sustainable development. Its buttressed towers are built entirely from natural, biodegradable materials. Its inhabitants live and work in quarters that are air-conditioned and humidity-regulated without consuming a single watt of electricity. Water comes from wells that dip deep into the earth, and food is cultivated self-sufficiently in gardens within its walls. This metropolis is not just ecofriendly; with its curved walls and graceful arches, it is rather beautiful, too.

This is no human city, of course. It is a termite mound. Unlike termites and other nest-building insects, we humans pay little attention to making buildings fit for their environments. “We can develop absurd architectural ideas without the punishment of natural selection,” says architect Juhani Pallasmaa of the Helsinki University of Technology. As we wake up to climate change and resource depletion, though, interest in how insects manage their built environments is reawakening.

“The building mechanisms and the design principles that make the properties of insect nests possible aren’t well understood,” says Guy Théraulaz of the CNRS Research Center on Animal Cognition in Toulouse, France. That’s not for want of trying. Research into termite mounds kicked off in the 1960s, when Swiss entomologist Martin Lüscher made trailblazing studies of nests created by termites of the genus Macrotermes on the plains of southern Africa. It was he who suggested the chaotic-looking mounds were in fact exquisitely engineered ecoconstructions.

Specifically, he proposed an intimate connection between how the mounds are built and what the termites eat. Macrotermes species live on cellulose, a constituent of plant matter that humans can’t digest. In fact, neither can termites. They get around this by cultivating gardens of fungi that turn wood into digestible nutrients.

These fungus gardens must be well-ventilated and their temperature and humidity closely controlled—no mean feat in the tropical climates in which termites live. In Lüscher’s picture, heat from the fungi’s metabolism and the termites’ bodies causes stagnant air laden with carbon dioxide to rise up a central chimney. From there, it fans out through the porous walls of the mound while new air is sucked in at the base.

So simple and appealing was this idea that it spawned at least one artificial imitation: the Eastgate Centre in Harare, Zimbabwe, designed by architect Mick Pearce. Opened in 1996, it boasts a termite-inspired ventilation and cooling system. Or at least it was thought to. It turns out, however, that few—if any—termite mounds work this way.

Keeping the temperature and humidity within termite mounds constant while at the same time getting rid of CO2 demands a very efficient process of gas exchange. A typical mound with about 2 million inhabitants needs to “breathe” about 1,000 liters of fresh air each day. To investigate further what might drive such an exchange, Scott Turner, termite expert at The State University of New York in Syracuse, and Rupert Soar of Freeform Engineering in Nottingham, U.K., looked into the design principles of Macrotermes mounds in Namibia. They found that the mounds’ walls are warmer than the central nest, which rules out the kind of buoyant outward flow of CO2-rich air proposed by Lüscher. Indeed, injecting a tracer gas into the mound showed little evidence of steady, convective air circulation.

Turner and Soar believe that termite mounds instead tap turbulence in the gusts of wind that hit them. A single breath of wind contains small eddies and currents that vary in speed and direction, with different frequencies. The outer walls of the mounds are built to allow only those eddies changing with low frequencies to penetrate deep within them. As the range of frequencies in the wind changes from gust to gust, the boundary between the stale air in the nest and the fresh air from outside moves about within the mounds’ walls, allowing the two bodies of air to be exchanged. In essence, the mound functions as a giant lung.

This is very different from the way ventilation works in modern human buildings. Here, fresh air is blown in through vents to flush stale air out. Turner thinks there is something to be gleaned from the termites’ approach. “We could turn the whole idea of the wall on its head,” he says. We should not think of walls as barriers to stop the outside from getting in but rather design them as adaptive, porous interfaces that regulate the exchange of heat and air between the inside and outside. “Instead of opening a window to let fresh air in, it would be the wall that does it, but carefully filtered and managed the way termite mounds do it,” he says.

Turner’s ideas were among many discussed at a workshop on insect architecture organized by Théraulaz in Italy last year. It aimed to pool understanding from a range of disciplines, from experts in insect behavior to practicing architects. “Some real points of contact began to emerge,” says Turner. “There was a prevailing idea among the biologists that architects could learn much from us. I think the opposite is also true.”

One theme was the proficiency of termites in adapting their buildings to local conditions. Termites in very hot climates, for example, embed their mounds deep into the vast heat sink of the soil—a hugely effective way of regulating temperature. Other species maintain humidity by depositing a slurry of chewed wood and grass at the base of the mound. This acts like a giant sponge which, with a capacity of up to 80 liters, can supply or absorb water to counteract any humidity fluctuations within the nest. Such a trick could be mimicked using water tanks positioned in the bowels of a building to restore humidity in hot, dry climates. “As we come to understand more, it opens up a vast universe of new bio-inspired design principles,” says Turner.

Tips might also be gleaned from the construction processes that insects employ. Some of the most thoroughly studied nest-building insects are paper wasps, named after the fibrous material they use to make their combs. These consist of arrangements of tubular cells with hexagonal cross-sections; and while the designs are astonishingly diverse, they are by no means random.

To find out how the combs are made, Théraulaz and his colleagues supplied differently colored paper to the wasps for each stage of nest-building. This showed that the wasps observe general construction rules based on the configuration of neighboring cells. “For example, they prefer to add cells to a corner area rather than starting a new row,” Théraulaz says. No individual wasp has any idea what the final structure will be, yet by following a simple set of rules—rules that evolution has determined maximize the insects’ chances for survival—the constructions they arrive at are sound.

Termites ensure a similarly successful outcome by using chemical signals called pheromones. As the nest-builders chew soil pellets into a cement-like paste, their saliva adds a chemical which, for just a few minutes, can be “smelled” by other builders over a distance of a centimeter or so. This sets up a positive feedback: the more a pillar is augmented, the stronger a pheromone source it becomes, causing the termites to add even more material.

Such approaches are anathema to human ideas of design and control, in which a central blueprint is laid down in advance by an architect and rigidly adhered to. But Turner thinks we could find ourselves adopting a more insect-like approach as technological advances make it feasible. “There’s a huge opportunity for robotics to build systems of agents linked by a distributed intelligence that can remodel a building’s structure as conditions change,” he says. That might sound fanciful, but really it is just a return to the old human practices of organic building and settlement design—in which additions and alterations were made piecemeal over time in response to what went before.

Termites face many of the same challenges we do in our built environments, and they meet them more efficiently and sustainably. “A mound is in many ways as alive as the termites that build it,” says Turner. Human buildings could soon come to life, too. ❧

Philip Ball is a freelance writer who has written more than a dozen science books, including Critical Mass, which won the 2005 Aventis Prize. A former editor at Nature, he contributes regularly to its online news site.