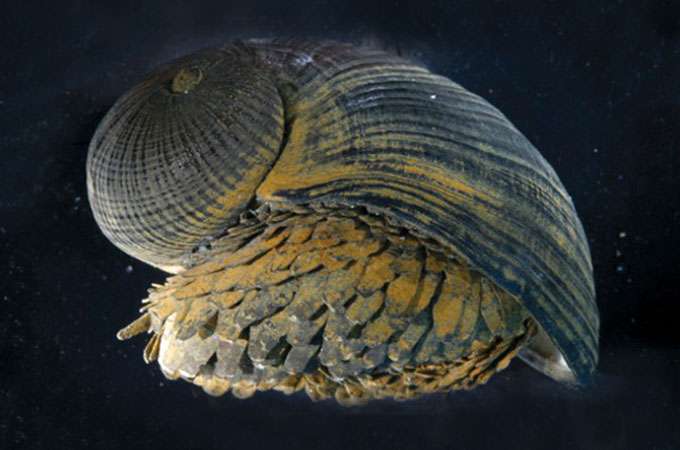 The scaly-foot gastropod (Crysomallon squamiferum) is one tough soldier. The tiny mollusk not only lives in one of the world’s harshest environments—the ultra-hot, acidic waters surrounding undersea hydrothermal vents—it also faces an army of predators that include fanged, venomous snails and crabs that can squeeze victims for days until they crack. Now, new research from MIT has found that the mechanisms keeping the gastropod safe could be mimicked to create everything from tougher military armor to sturdier football helmets and water pipelines.

The scaly-foot gastropod’s path from the bottom of the ocean to an MIT laboratory began in 2003, when materials engineering professor Christine Ortiz wondered how its protective shell could withstand such intense physical and chemical stress. To investigate, Ortiz’s team simulated predator attacks on a computer and used sophisticated tools to gauge the shell’s hardness and stiffness.

They discovered that the shell has a unique, tri-layered structure: an unusually thick and squishy middle sandwiched between two stiff layers. Each layer plays a special role in resisting penetration, dissipating heat, and reducing fracture strains—all in a package that’s less than half as thick as a dime. Simply put, the snail’s iron-plated shield is “unlike any other known natural or synthetic engineered armor,” according to a recent paper in Proceedings of the National Academy of Sciences. This explains why one of the paper’s coauthors was Timothy Imholt, a defense contractor from Raytheon.

Although multilayered military armor dates back to World War I–era Russian tanks, Imholt says improvements since then have been few and far between. Now, by using the gastropod’s shell as a model, military engineers may be able to cut years off the time it takes to develop new protective gear.

Designers may, for example, want to imitate the way the three shell layers interact to protect their host. Under a hard impact, the iron scales form small cracks that distribute the force. The middle layer then acts like a shock absorber. The calcified layer forms a last line of defense. And MIT’s Ortiz thinks snail-inspired armor could be just the beginning. She is now studying urchins, beetles, and armored fish for more of evolution’s ideas. ❧