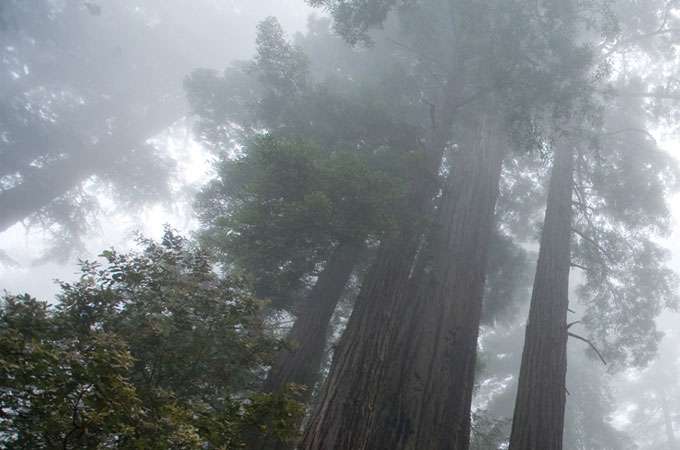 Researchers have long known that coast redwoods rely on frequent baths of moist air—i.e., fog—to stay hydrated during dry summer months. Suspecting also that fog levels are changing, possibly due to climate change, they have struggled to monitor the historical variations. Now, James Johnstone and Todd Dawson of the University of California, Berkeley, may have cracked the code—and possibly shed new light on the redwoods’ future—by using an unlikely data source: airport records.

The researchers looked at data on the height of cloud ceilings at airports along the California and southern Ore-gon coasts. The records, which date back to 1951, show that the number of foggy summer days fluctuates widely from year to year, with an overall decline through the 1980s and 1990s.

To determine fog frequency prior to 1951, the researchers looked at variations in the regional climate. In summers with extended periods of high pressure, temperatures in inland northern California soar while cool, moist air remains trapped at the coast. Fog frequency is closely correlated with this coastal-inland temperature contrast, allowing the researchers to infer fog levels by looking at historical temperature readings. While the number of foggy days has gone back up a bit in the past decade, Johnstone and Dawson conclude that California’s coastal fog has decreased by about 33 percent since the early twentieth century.

So what does this mean for redwoods? The present distribution of the coast redwood falls within a band where fog frequency is 35 percent or higher, the researchers say. If the reported trends continue, fog incidence could soon drop well below that number, depriving redwoods of their primary mechanism for reducing water loss. ❧
—Scott Norris