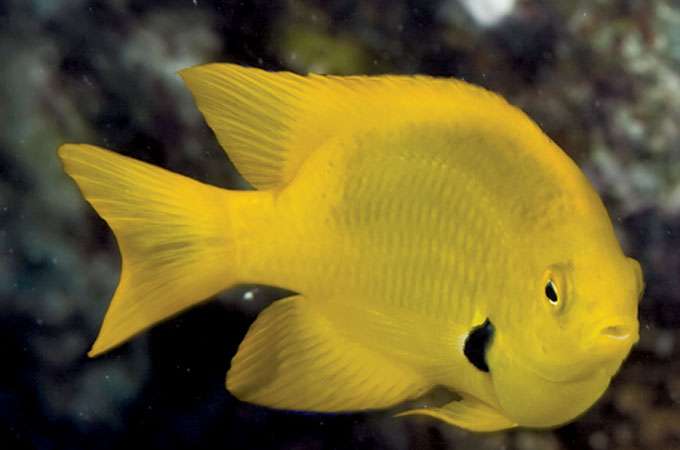 Octopuses, hyenas, spiders, and fish are just a few of the critters shown in recent years to behave consistently across situations and time—to have personalities, if you will. Much like people, some individuals are naturally bold, some are meek; some are active, some are couch potatoes; and so on. But what happens when—as may be the case with climate change—you turn up the heat a little? A new study shows that warmer water changes reef fishes’ personalities, making them more active, bold, and aggressive—and more likely to get eaten.

Researchers led by Peter A. Biro of Australia’s University of Technology Sydney stumbled upon the discovery while testing the personalities of lemon damselfish, Pomacentrus moluccensis. The researchers were monitoring the damselfishes’ activity levels and their reactions to a simulated attack or to another fish. To the researchers’ surprise, they quickly noticed that a given fish behaved quite differently in the mornings than in the slightly warmer afternoons.

Intrigued, they ran speckled damselfish, P. bankanensis, through similar tests while carefully varying the water temperature within a normal range of three degrees Celsius. Not only were most fish dramatically bolder and more active at slightly warmer temperatures, but some changed more than others.

What’s more, a given fish’s boldness and activity scores changed in lockstep as the temperature rose. Biro thinks that, in cold-blooded animals such as fish, these personality traits—along with aggression—may be linked as a byproduct of metabolism. Warmer water entails higher metabolic needs that more aggressive, bold, and active fish have the get-up-and-go to accomodate.

Other studies have shown that, because these fish are less wary and spend more time foraging instead of hiding out, they’re more likely to be gobbled up by predators. Which leads Biro to speculate that warmer, potentially more variable temperatures brought on by climate change could result in higher mortality rates as more fish wind up in nets or predators’ bellies, casualties of their own hopped-up bravado. ❧
—Rebecca Kessler