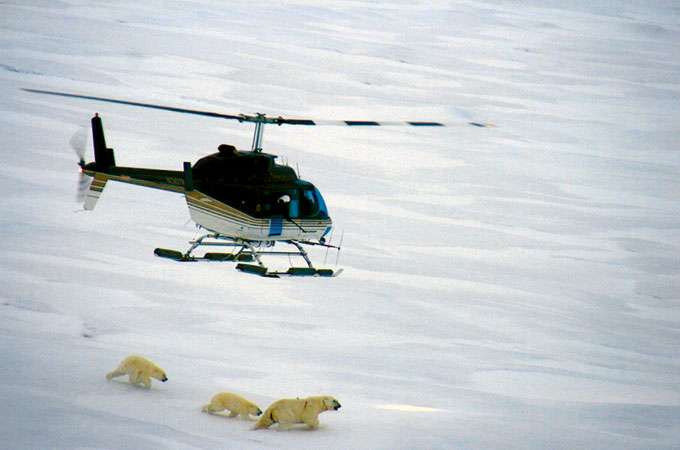 Bacteria resistant to antibiotics are becoming disturbingly common in people. Even more worrisome, genes conferring this resistance are showing up in bacteria found in other animals. When resistant bacteria hop between species, that can increase the rate of evolution and turn a mildly resistant bug into a serious threat.

This has left researchers wondering how resistant bacteria get into animals in the first place. One possibility is that genes for antibiotic resistance circulate naturally in wild populations. Another possibility: human antibiotic use has promoted the circulation of resistance genes to other species.

Until recently, most studies looking at bacteria in such species have concentrated on domestic animals. But a research team led by Trine Glad and Monica Sundset at Norway’s University of Tromsø have now looked in the wild. In fact, they have gone just about as wild as possible, examining polar bears on the Arctic archipelago of Svalbard. They chose these bears because they neither interact with people nor prey on animals that spend time near humans. The team theorized that, if the circulation of genes for antibiotic resistance was a natural phenomenon, they would find these genes even in this isolated population. If it was not natural, they reckoned, the bears would carry few, if any, bacteria with such resistance.

To complete their analysis, they needed feces samples. Simply traveling to the icy plains of Svalbard, however, and searching for polar-bear droppings was not practical; such droppings might have become contaminated after they left the animal. Instead, the team searched for bears by helicopter and tranquilized each one they found with a dart. Once a bear went down, they landed and collected a sample directly from its rectum.

The team tested the bacteria found in samples from ten bears for the presence of blaTEM genes, which encode resistance to common antibiotics. Cultures from the samples were grown on two sorts of media. One contained an antibiotic to which blaTEM confers resistance; the other, acting as a control, did not. The resulting colonies were then analyzed to determine which strain of bug they had grown from.

The discovery that animals in pristine environments have few bacteria with resistance genes makes it likely that human antibiotic use is indeed the cause of much of the antibiotic resistance found in other species.

Much, but perhaps not all. The bears are so isolated that Sundset doesn’t believe they could have picked up from people the resistant strains they do have. The only explanation she can offer is that the bears have a natural, if low, level of antibiotic resistance. ❧