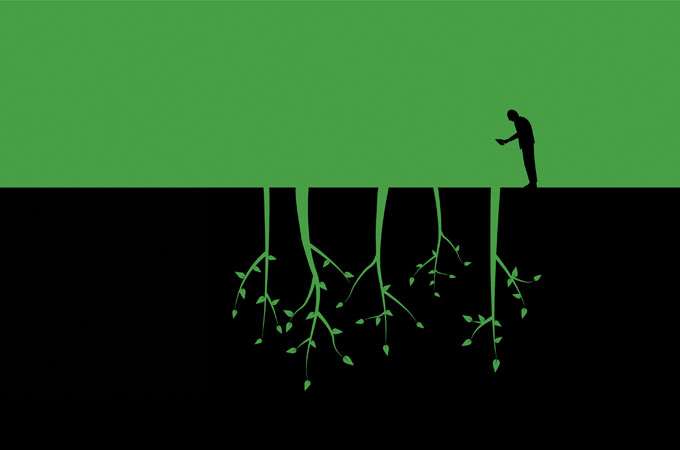 Black Is the New Green

In a deft act of ecological jujitsu, Johannes Lehmann wants to borrow an 8,000-year-old technology to interrupt the natural carbon cycle and return some of the infamous black stuff to the soil.

Win-win solutions can be hard to come by. But if Cornell University soil scientist Johannes Lehmann is right, there may be a way to lower our emission of heat-trapping greenhouse gases, save millions of people’s lives, and significantly boost the productivity of the world’s farms—all at the same time. And, most remarkably, his strategy is based on a deceptively simple technology invented 8,000 years ago.

Lehmann’s idea starts with organic leftovers that people normally burn or leave to rot—forest brush, corn husks, nutshells, and even chicken manure. When this stuff decays or goes up in smoke, it releases vast amounts of heat-trapping carbon into the atmosphere. Lehmann’s plan is to short-circuit this carbon cycle by creating a material called biochar. Making biochar involves heating this organic matter without oxygen in a process called pyrolysis. It can be carried out in a small household stove, or it can be an industrial operation. Either way, the pyrolysis doesn’t produce carbon dioxide as ordinary, oxygen-fueled fire does. Instead, the carbon gets locked up in black chunks of charcoal-like matter.

Take that biochar and bury it in farm fields, and it acts like a giant carbon sponge holding in moisture and nutrients that boost crop yields. In 2003, Lehmann and his colleagues treated farm fields in Colombia with biochar and found they yielded up to 140 percent more corn per acre compared to biochar-free fields.

What’s more, the buried biochar turns out to be remarkably stable, locking up carbon for hundreds or even thousands of years. Lehmann’s calculations suggest that transforming the crop waste from 120 million hectares of U.S. farmland alone could sequester ten percent of the nation’s annual carbon emissions. Play that out on a global scale, and you can make a serious dent in climate change.

Lehmann’s fascination with biochar began in the late 1990s while he was living in Brazil, working on a project to heal the ravaged soil of the rainforest. When the forest is cut away and replaced by farms or ranches, the fragile Amazon soil erodes and eventually becomes exhausted. As Lehmann toured the Amazon, he would sometimes come across huge patches of rich, dark soil that stood out from the red clay common to the region. When he traveled by boat, he could see thick layers of the stuff sandwiched along the banks.

Lehmann was looking at one of the Amazon’s great mysteries: terra preta, or black earth. He wasn’t the first to encounter this amazing soil. Europeans first recorded pockets of terra preta along the waterways of Brazil in 1871. But even after more than 100 years, no one was quite sure how it had gotten there or why it worked.

Early on, some scientists speculated that terra preta was the remnants of dead lakes. Others thought it was formed by blankets of ash from volcanoes. It didn’t occur to scientists for a long time that terra preta might be the signature of an ancient Amazonian society. They narrowly pictured the Amazon rainforest as a primeval wilderness before the arrival of Europeans. In recent decades, however, archaeologists have recognized that pre-Columbian Amazonia supported a prospering population of Indians who built towns and large-scale farming and fishing operations.

Thanks to the work of Lehmann and others, it now seems clear that those ancient farmers were onto something. Whether deliberately or by happy accident, the Amazonians created terra preta and used it to improve the soil. Radiocarbon dating reveals that people began laying down the stuff at least 8,000 years ago. And they kept creating more of it until Europeans arrived. For thousands of years, it steadfastly resisted erosion and remained loaded with rich, black carbon.
And this discovery led to a profound idea. Lehmann and his colleagues began to wonder whether they could create a modern-day terra preta—in the form of biochar—to solve some very twenty-first century problems.

For the past decade, Lehmann has been devoted to finding the answer. His work is spread out across multiple fronts. He oversees experimental farm fields in countries including Brazil, Colombia, and Kenya as well as greenhouse and laboratory experiments at Cornell University in Ithaca, New York. He’s currently evaluating the horticultural effects of over 100 different biochar variations—ranging from chicken manure to nutshells and even discarded food waste from university cafeterias.

Lehmann thinks that large-scale biochar production in the U.S. and other industrialized countries could be an efficient way to combat global warming. In a commentary in Nature, Lehmann proposed the idea of power plants fueled with materials such as forest residues or fast-growing plants such as switch grass growing on idle land. (1) A number of companies already generate bioenergy in this way. But to date, they’ve treated biochar as merely a byproduct that can be burned to reduce costs. Lehmann believes that, if they were to put biochar back into the soil instead of burning it, bioenergy could be a carbon-negative industry.

But Lehmann believes that biochar production can also work on much smaller scales in the developing world to save lives and reduce carbon emissions. In many parts of the world, people are wiping out forests to make charcoal for fuel. When they cook with charcoal, they often use poorly designed indoor stoves that fill their houses with a deadly cloud of pollutants. (Indoor air pollution kills 1.6 million people every year.) Moreover, when wood burns in an ordinary stove, it releases soot and carbon dioxide, both of which can trap heat in the atmosphere.

Biochar stoves could potentially knock out both threats with one proverbial stone. Several inventors are designing cheap, efficient models that allow people to cook without generating a lot of smoke. Instead of heating wood, these stoves use other plant material—even run-of-the-mill farm refuse. “Rather than women having to trudge into the forest and bring out a big log, they can use brush or corn husks,” says Lehmann. They simply load the stove with fresh organic matter and light a conventional fire just long enough to get the material hot enough to release gases, which the stove can then burn to release even more heat.

It takes conventional wood fire only a few minutes to get pyrolysis into a self-sustaining cycle. And because a pyrolysis stove doesn’t produce much smoke, it releases very little carbon dioxide or soot. Instead, the carbon ends up in leftover lumps of biochar. And when farmers bury it in their fields, that carbon stays underground—for an extraordinarily
long time.

It’s the kind of win-win that captures people’s imaginations. Thanks to Lehmann and his fellow biochar advocates, terra preta has been transformed from obscure patches of Amazonian dirt to the subject of some of the biggest debates in climate-policy circles. The U.S. Department of Agriculture and other funding agencies are plowing millions of dollars into biochar research. Private companies are starting up, hoping to make money in the carbon-credit market by producing biochar on an industrial scale.

Mario Molina, Nobel laureate for his discovery of the destruction of the ozone layer, and his colleagues published a paper in Proceedings of the National Academies of Sciences last fall in which they argued in favor of solutions for climate change that would be both quick and effective. (2) Biochar was high on their list. “These and other fast-action strategies may reduce the risk of abrupt climate change in the next few decades by complementing cuts in CO2 emissions,” the scientists wrote.
But the Royal Society came to a notably different conclusion about biochar in their report Geoengineering the Climate. (3) They questioned how effective biochar would turn out to be for reducing carbon emissions. They also warned that the global biochar bonanza could even cause great harm. “Inappropriately applied incentives to encourage biochar might increase the cost and reduce the availability of food crops,” they wrote.

Writing in The Guardian, environmentalist George Monbiot made a blunter political attack on biochar. (4) “The idea that biochar is a universal solution that can be safely deployed on a vast scale is as misguided as Mao Zedong’s Great Leap Backwards,” he wrote. “We clutch at straws (and other biomass) in our desperation to believe there is an easy way out.”

Lehmann is not a Maoist zealot about biochar, however. He is the first to admit that biochar might not make sense in many parts of the world—and that meeting the challenges of global warming will require significant reductions in fossil-fuel use. But he’s also a realist. He insists that any viable climate-change strategy must also involve actively withdrawing some carbon dioxide from the atmosphere. And if we have to stash away large amounts of carbon to create temporary relief in our emission balance—why not grow some food with it? ❧

Carl Zimmer is a contributing editor at Discover magazine. His latest book, The Tangled Bank: An Introduction to Evolution, was published by Roberts and Company Publishers in 2009. He also contributes articles to the New York Times, National Geographic, Time, Scientific American, Science, and Popular Science.